Growing Up a Damsel - Ms. Magazine
Skip to content

Let me start with a story. I was 13—just—and at a birthday party. The birthday girl wasn’t exactly my friend; we had only recently moved to town, and I was awkward, and things like friends did not come easily to me.

Girls and boys, both, were invited to this party, which began at sundown. We congregated in the detached garage. It was finished with indoor/outdoor carpet, posters, twinkle lights and a stereo. Someone put on music, and the girls screamed and held hands and jumped up and down, and they danced. Most of the boys clustered by the snack table; only one joined the girls in their ecstatic gyrations.

I didn’t know where to go—not with the boys by the snack table, not out in the wide frightening abyss of the dance area in the middle of the garage. It wasn’t long before someone switched the music to slow songs, and then it seemed that everyone paired up, boy and girl, and it was just me, rocking awkwardly side to side, arms folded as if I didn’t mind that I was the only one not dancing.

The birthday girl’s father came in to check on the snacks—and when he saw me standing alone, he looked around and then offered me his hand. Not taking it seemed even worse than taking it, so take it I did, my fingers disappearing into the rough warm fold of his grip.

He led me to the edge of dancing bodies and put one hand on my waist. He began to dance. He moved my body around the green fake-grass carpet. I didn’t know how to feel about his hand, large and heavy like an animal’s paw, on my waist. All around me, teen bodies swayed. Overhead, lights twinkled.

Bending down, so his breath dampened my ear, the birthday girl’s father told me: “The boys your age don’t realize it yet, but you’re the prize here.” My stomach soured. My eyes stung. But I smiled, and I said thank you, and I danced with him as long as he wanted to dance with me.

Many years later, I found a long-forgotten box of photographs. Among the expected pictures of me—with family pets, with my sister, with ice cream on my cheeks, curled up in a chair with a book—I found a series of pictures of me naked except for a straw cowboy hat. In these photos, I was perhaps four or five years old, maybe six. In a few of them, I had one hand on my head, the other on my waist, hip popped out, in the age-old posture of a sexy woman.

Where did these pictures come from? Was that really me? What was I thinking, to pose like that? And who was behind the camera? I had no idea, not then, not now—just a vague, unsettled shame and the sensation that to tell anyone about the photos then, or even to write about them now, was treacherously wrong. 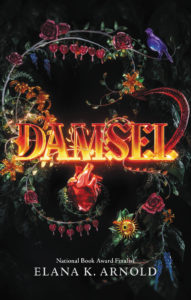 I have been writing books about young women since I was a young woman. My first collection of short stories, written while I was an undergraduate, was titled Objects of Desire. Each story centered an object that marks women as desirable, objects the women in the stories desired and women who were, themselves, objects of desire. As a published novelist of young adult books, I’ve continued to center girls—their bodies, their desires, their desirability.

A girl is both a subject and an object. Maybe everything, everyone, is—I don’t know. But a girl is.

My most recent novel, Damsel, is the story of a girl who wakes, naked and with no memory, in the arms of a prince. He tells her that she is the damsel, and that he rescued her, and that now she will be his bride. Damsel is a book full of eyes and secrets and ugly truths. Animals suffer. Women are hurt. Burdens are borne.

I think of myself, at 13, in the arms of the father at the dance party, matching my steps to his, accepting his hands on my body, even as my stomach turned, fitting myself into the shape of his embrace. I think of myself, naked, posing. Did someone tell me how to pose? Yes—perhaps not the eye behind the camera, but the larger eye that watches girls always, that teaches us how to stand and look and move.

The thing about being a prize, as that father called me, is that prizes don’t get to become. They are static, and for the taking—like the photographs of me as a young girl. As my brilliant friend Kelly Barnhill said when I told her this story: “A prize does not want. A prize does not feel. A prize exists because the beholder wishes it to exist. A prize has no narrative arc of her own. A prize is inert, immobile, without breath or determination or change. A prize is a possession to be owned.”

I grew up a damsel. I am done with that now.

And you, my friends, what do you say? Let’s not be prizes. Let’s not be damsels or still photos for the taking. Let’s be huge and monstrous. Let’s twist up our mouths into grimaces and rage. Let us desire.

Elana K. Arnold is the author of Damsel. You can learn more about her at elanakarnold.com.