Nadya Tolokonnikova is no stranger to speaking out.

The member of Russian resistance band Pussy Riot is an outspoken feminist and anti-authoritarian activist who has taken on Vladmir Putin, the Orthodox Church and institutional misogyny with the same fervor and fearlessness. In her latest book, she’s laying out the steps feminists around the world can take in order to follow in her footsteps.

Read and Riot: A Pussy Riot Guide to Activism is a triumph. As hilarious as it is thoughtful, Tolokonnikova spans topics from punk music to prison reform in its pages. Ms. caught up with the internationally-renowned firebrand to talk about what she’s fighting for, what inspires her about activism in the U.S. and her own revolution from within. 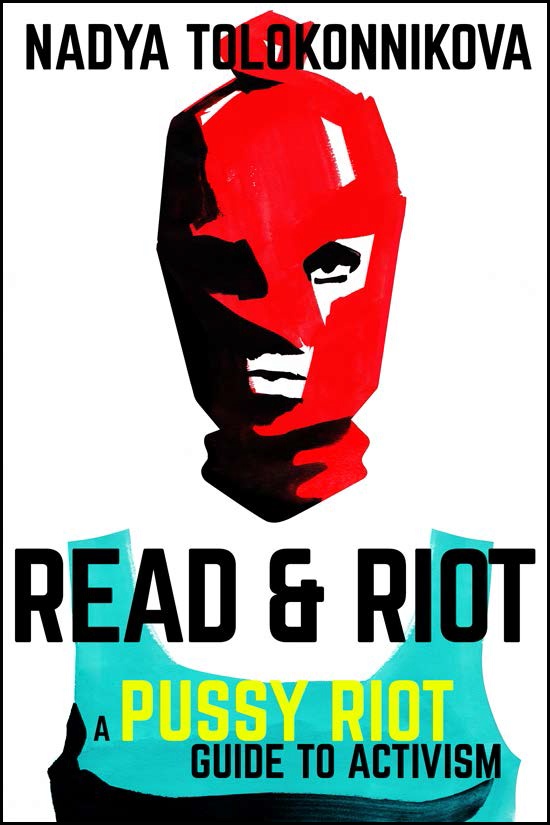 I loved the tone of Read and Riot—it was very casual, as if to welcome the reader in, not to scare them away. Was that on purpose?

It was a very important thing for me, because basically, all my life, I was working with volunteers, people who don’t have to do anything, but they still did it for a number of reasons, usually their ideals. You really learn how to appreciate people’s motivations and energy. I think the whole tone of activism should be inviting—not trying to make someone do something, not trying to push someone to do anything, but respecting somebody else’s freedom and trying to find a common ground that brings us together.

Although there are plenty of action-oriented suggestions, the book is also very focused revolutionizing yourself internally. Why do you think the idea that everyday people have power is still so radical?

I try to analyze the way that media works, the way that power structures works. In what way do they want you to see the world, and how can you radically subvert this ritual that they want you to follow, and how can you refuse to follow it? Building your own mythology, your own world—it is really important to dream and not to forget to ask uncomfortable questions, including about yourself.

I am trying to invite people to build that alternative world right now, together—and we absolutely can start to do it right now. I know it’s not really easy. I don’t do it all the time. But I’m trying to be more conscious about it.

Each chapter is separated into words, deeds and heroes. Why do you think all three are important aspects of activism?

That’s just how my mind works. I believe that theory and practice should always come together, and a hero is somebody who can inspire you to do great things—who can shape you as a person, as a human being, and who can embody this combination of words and deeds.

What activism inspires you today?

I respect the Black Lives Matter movement so much. I was lucky to hear them in New York, and they are such inspiring human beings. When I went back to Russia, I felt like my activism was really inspired.

In the book you talk about your company Media Zone, which is focused on factual propaganda-free media. What is the most important thing you want to tell people about Media Zone?

That it is free of censorship, actually activist, a political media outlet providing news for fellow Russians.

After three years of prison, Masha and Peter and I made Media Zone so that we could take hidden topics to the light. We have the support of a lot of amazing NGOs in Russia that are really working on a daily basis to provide prisoners help, and we actually have had some results. Right now, prison officials are scared to find themselves on the pages of Media Zone—because they know it can bring them some trouble. Some of them lost their positions, some of them ended up in jail, because we made investigations—and it makes me proud of Media Zone.

In your book you say that “prison is an island of legalized totalitarianism.” What can everyday people to do help prisoners?

Write letters to the prisoners. Pass them food. Not only to political prisoners, but to ordinary prisoners—in a way, a lot of them are political. Because of the war on drugs, and corruption in our legal systems, and bribes, the reasons that you might end up in jail might be political, even if your case is not.

Ask them what happened, how can we restructure society. I know in a number of prisons in America it is possible to teach in prisons, and it has had really great results. I know how important it is to be supported by the outside world while in prison. It feels like: “no one wants me to be outside, I’m already dead.” But you can try to change the perception.

Push your politicians to make prison reforms. It’s insane that the American prison system is so close to Russia’s system, but at the same time, you call yourself a free nation and blah blah blah—but really, the punishments are really similar.

What advice do you give to people who are tired of politics, or who feel hopeless in today’s political climate?

I can understand if someone doesn’t want to be involved in politics because of fear—you literally can go to jail because of tweets in Russia. I think if you are not facing the same kind of obstacles, it means you are lazy or not interested—but how can you not be interested in something that changes your life and the lives of your kids?

Luckily, I didn’t see that many Americans saying that. I saw young American kids starting to be involved in politics and I was so inspired.

What is your feminist goal?

To give my daughter a chance to live in a Russia where she will not be disrespected because she is a woman, where men will be shaking hands with a woman when she enters the room.

I want her to have a chance to decide what she does with her body.

I want to change this country to let her live her free life.

Amy DePoy is a student at Yale University and a former editorial intern at Ms. She loves feminism, reading and writing. She also loves all fruits, but especially strawberries.