2018 was the Year of the Feminist Guidebook. The Ms. offices were overrun with galley copies of workbooks, step-by-step manuals and journals meant to encourage and empower feminists to find their way to activism and fight for change. On the heels of the massive Women’s Marches, it makes sense that this is a prime moment for recruiting and engaging activists in the work—and these books make for the perfect gifts for the women and girls in your life looking to get started and get even louder. 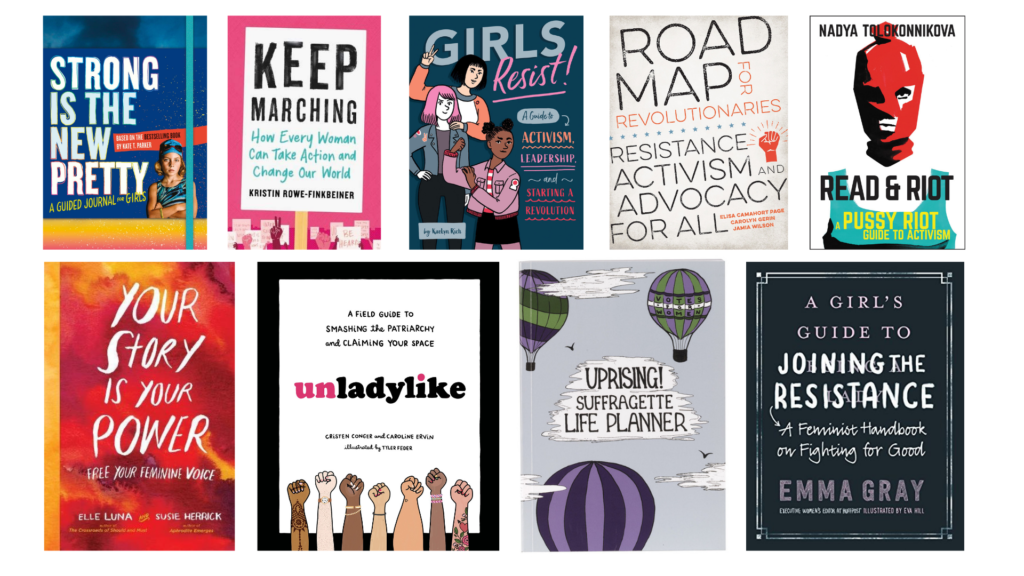 For the Future Revolutionary: Girls Resist!

KaeLyn Rich is a queer Korean mom on a mission to empower girls, and Girls Resist is her in-kind gift to the next leaders of the feminist movement. Rich brings her own extensive history of organizing and advocacy to its pages, exploring the landscape of the movement for gender justice and leveraging her own insights as an experienced organizer and advocate to walk readers through planning protests, running meetings and crafting media messages. Rich’s short and sweet guidebook is the perfect gift for the young revolutionary at your holiday dinner table, and it’s one she’ll want to keep in her

For the Women’s March Set: Keep Marching: How Every Woman Can Take Action and Change Our World

In the wake of the Women’s March, CEO and President of MomsRising Kristen Rowe-Finkbeiner released Keep Marching to invite new activists into the fold of the feminist movement—and guide them through building community and energy around the issues they care most about. Through a number of “How To” guides and primers on various interconnected women’s issues, Rowe-Finkbeiner walks the readers through the basics of the modern-day women’s movement, and equips them in the process with the tools and resources they need to march on and act up for change.

For the Up-and-Coming Movement Leader: Roadmap for Revolutionaries

Road Map for Revolutionaries is a consciousness-raising session in print. The interactive and media-rich workbook encourages women to wake up to the discrimination they face—and vigilantly protect their rights and rise up on behalf of their communities. Five sections spanning strategies for reform, from economic pressure tactics to mechanisms for policy and institutional reform, provide readers with case studies, resources and avenues for further action—all by way of easy-to-digest infographics, lists and field note primers that make changing the world seem more possible than ever. In the midst of the Trump era, the three co-authors—Page, the founder of BlogHer; Gerin, creator of the Anti-Bride book series; and Wilson, director of the Feminist Press—urge to refrain from feeling discouraged and giving up. Instead, they implore readers to resist, act and advocate in defiance of discrimination and injustice.

For the Defiant Rabble-Rouser: Read and Riot: The Pussy Riot Guide to Activism

After co-founding the feminist protest punk group Pussy Riot, in 2011, Nadya Tolokonnikova was arrested for 18 months for performing in protest of Vladimir Putin in Moscow. Now, the feminist firebrand is equipping activists around the world to take up her spirit of defiance and build better movements for social change. Read and Riot is a powerful venue for Tolokonnikova’s fire and energy, which keeps readers looking for more empowerment and encouragement on every page. The feminist anti-authoritarian leader lays out 10 rules in the book—stay weird and proud witch and bitch, to name a few—and calls on women everywhere to stand up for themselves and against the system, and to write in every margin. (Literally.) Tolokonnikova is past playing nice; she’s ready to call a trial in which all bigots and misogynists are called upon to defend themselves. With her help, readers will likely become powerful jurors in the fight ahead.

For the Feminist Newcomer: A Girl’s Guide to Joining the Resistance: A Feminist Handbook on Fighting for Good

Women everywhere woke up ready to fight after the 2016 election, and have been taking to the streets ever since. Emma Gray, Executive Women’s Editor at HuffPost, followed them into the fray in search of solid starting points for the young feminists hungry for change and looking to take up arms with the movement. A Girl’s Guide to Joining the Resistance is the resulting handbook—a pocket-sized manual for navigating the media landscape to get good information, organizing tips and tricks from seasoned rabble-rousers, self-care advice, resources for further learning and activism, phone scripts for calling your elected officials and interviews with progressive superstars like Marlo Thomas and Tina Tchen. Gray’s suggestions and calls to action are more than just fodder for immediate relief—she’s hoping to help young women build a sustained movement for change. As the countdown to the next Women’s March begins, it couldn’t make for a more timely tiding for feminists interested in marching on for social change.

For the Feminist Podcast Fiend: Unladylike: A Field Guide to Smashing the Patriarchy and Claiming Your Space

You don’t need to be an avid follower of the podcast “Unladylike” to enjoy the book co-hosts Cristen Conger and Caroline Ervin have assembled for women like their listeners—modern feminists yearning for a movement in plain (and sometimes strong) language. Meeting them where the personal meets the political, the authors map out the patriarchy’s strongholds on our lives, and then bring together the voices of activists and the data from experts to chart a collective course out. Unladylike walks readers through feminist theory, women’s history and what it’s going to take to change the future—but much like the podcast of the same name, it makes building the resistance feel like a conversation with a good friend.

For the Woman Who Wants to Speak Up: Your Story is Your Power: Free Your Feminine Voice

In the wake of the #MeToo movement’s explosion, Elle Luna and Susie Herrick want to empower even more women to speak up. Your Story is Your Power, which is rooted both in therapeutic methodologies and a deep belief in collective action, encourages and challenges readers to reflect on their own narratives and to speak their truths. Their illustrated and inspiring guide combines writing exercises with opportunities for deep reflection—and envisions a world in which women’s voices, altogether, shed light on the urgent need for social change and call others to action.

For the Girl Searching for Her Own Girl Power: Strong is the New Pretty: A Guided Journal for Girls

Based on her bestselling book Strong is the New Pretty, Kate Parker’s latest effort to empower girls puts the story back in their hands. Parker’s guided journal encourages self-reflection and self-expression, and steers its participants toward self-empowerment. Within its pages, girls are challenged to record what issues they care about, pushed to examine what life is like for girls elsewhere, instructed to read newspapers in search of new information, given space to draw maps of their dream vacations and equipped to craft strategies for changing their communities. This book is the perfect gift for the thoughtful young feminists in your life—and it’s the perfect activist alternative to mass-produced activity books that weren’t published with girls’ potential in mind.

There are no dates in the Suffragette Life Planner—instead, there are lots of blank pages, unfilled lists and writing prompts to inspire the next generation to collect inspiration, plan acts of rebellion and keep up with their own radical reading. Printed by the independent press Clavis and Claustra, Uprising is a dream journal for women who dream of a different world, and a safe space for visioning how to get there.

About Carmen Rios and Emma Encinas

Carmen Rios is a self-proclaimed feminist superstar and the former digital editor at Ms. Her writing on queerness, gender, race and class has been published in print and online by outlets including BuzzFeed, Bitch, Bust, CityLab, DAME, ElixHER, Feministing, Feminist Formations, GirlBoss, GrokNation, MEL, Mic, the National Women’s History Museum, SIGNS and the Women’s Media Center; and she is a co-founder of Webby-nominated Argot Magazine. @carmenriosss|carmenfuckingrios.com
Emma Encinas is a former editorial intern at Ms.