In Which Trump Reminded the Global Community How Hateful He Really Is - Ms. Magazine
Skip to content

“We must always be skeptical of those who want conformity and control,” said the man who regularly cozies up to dictators, attacks journalists with whom he disagrees and goes out of his way to defend his fellow white supremacists.

“We stand in solidarity with LGBTQ people,” claimed a president who has apparently forgotten about all the well-known homophobes he hired, as well as his administration’s current push to legalize employment discrimination against LGBTQ people. Trump also claimed to support religious liberty “for all,” despite the virulent Islamophobia and anti-Semitism that have become hallmarks of his political career.

Trump also took the time to threaten those defending the human rights of migrants, who he claims “put [their] own sense of virtue before the lives [and] wellbeing of countless innocent people”—the same innocent people his administration denies asylum, puts in concentration camps and refuses life-saving medical care. This would be laughable if civil society and human rights defenders were not increasingly at risk around the world, due in no small part to autocrats like him.

America’s most famous sexual predator also paid lip service to women’s issues, boasting about the new White House Women’s Global Development and Prosperity Initiative that is completely undermined by almost every other policy his administration has enacted. Economic freedom is impossible without the freedom to access basic healthcare or make decisions about when and whether to have children, and the Trump administration has gone further than any U.S. president in slashing family planning assistance—with deadly results.

The Trump administration is so dedicated to its regressive agenda that earlier this year, it refused to support any mention of sexual and reproductive healthcare in a UN Security Council Resolution supporting survivors of wartime rape, and it continues to pressure other nations to abandon their commitments to reproductive freedom.

Here’s a quick recap of Tuesday’s address: Trump wants to empower American citizens, but only if those citizens are Trump voters. He believes in free speech, but only for himself and the white supremacist ilk he’s emboldened. He thinks women ought to have rights, but not their right to bodily autonomy. He believes in religious liberty, as long as it’s not for Muslims. He thinks every child “is a sacred gift from God,” unless that child was born outside the United States, in which case he’ll condemn them to die in federal custody.

The only thing new in Trump’s third address to the UN appeared to be the manner of its delivery, which the New York Times called “unusually flat” and “monotone.” But regardless of how it sounded, his trademark message of hate and discrimination, showcased yet again on the world stage, remains just as troubling to supporters of human rights.

Merrite Johnson is the Program Coordinator at the Global Justice Center. She holds a Master’s degree in Comparative Politics from New York University, focusing on women's political participation in post-conflict countries. 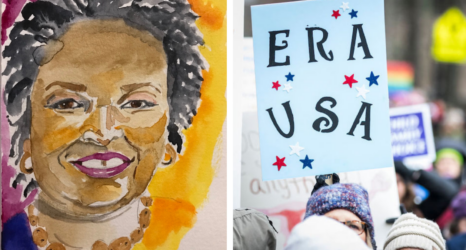