Five Lessons the AIDS Epidemic Can Teach Us About COVID-19 - Ms. Magazine
Skip to content

There is a reason that a map of HIV in the South today looks like a map of slavery in 1860.  Stay tuned for a similar map of COVID-19 in the coming months or years.

We can do what we can today to mitigate this crisis—but unless we continue to address the deep inequalities in our country, the groundwork for the next epidemic, and the one after, has already been laid.

For many of us, this spring feels like the early days of AIDS epidemic—including the fear, uncertainty and criminally-delayed response by the federal government which has meant, and will continue to mean, that people will die unnecessarily.

Having survived one plague, here are some key lessons as we confront another:

HIV was first a disease primarily of gay men; and then more and more of men, women and transgender people of color. The impact of oppression and discrimination—whether measured by access to health care, poverty, mental health or substance abuse—paved the way for HIV to disproportionately impact marginalized communities.

Today, people of color continue to be less likely to have access to, and the benefits from, life-saving and live-changing HIV medications.

We can expect COVID-19 to flow through the same furrows. It will impact vulnerable communities much more and much longer. Is there any doubt already that the rich and connected have gotten quicker access to COVID-19 testing than the rest of us?

Public health is advanced through the protection of individual rights.

In response to coronavirus, we have seen the power of the state deployed at an unprecedented scale and in unprecedented ways: travel bans, closures, shelter-in-place declarations, social distancing and quarantines.  These are necessary and effective responses.

But what we can learn from HIV is that we can’t lose sight of the individual in our pursuit of public health. For this to work, we need people to trust and engage with our health care and public health systems.

HIV has taught us that it is counterproductive to run roughshod over patient autonomy and privacy when fighting an epidemic.  For example, studies show that if you educate people about the benefits of HIV-testing—pregnant women, for example—and let them decide what course to take, almost all of them choose to test and treat. Having made that choice, they are more likely to stay engaged with their treatment and the healthcare system over the long haul.

In fighting COVID-19, we need to educate and engage people as we use the power of traditional public health tools.

As the revered Jonathan Mann, who founded the World Health Organization’s Global Program on AIDS, theorized in the early years of the AIDS epidemic, public health and civil rights are not in conflict: Advancing the latter is the best way to advance the former.

Be on guard for stigma and discrimination.

In the early years of the AIDS epidemic, people lost their jobs, children were kicked out of schools, municipal pools were drained and dying gay men were stacked up in hospital hallways because there were not enough beds or staff to treat them.

We have already seen examples of violence, discrimination, harassment, racism and xenophobia in response to coronavirus. As the disease progresses and becomes more concentrated in already marginalized communities, we will again need to remind ourselves and others that risk is created by conduct not categories of people; that we all have a role to play in protecting ourselves and others; and whatever causes someone to get HIV or COVID-19, it definitely was not a decision with any more moral weight than you or I make a hundred times each day.

And, of course, governments discriminate too.  One of the earliest public health cases in constitutional law, Jew Ho v. Williamson, was a challenge to a quarantine in San Francisco in 1900 for a purported bubonic plague outbreak. The quarantine just so happened to neatly blockade Chinatown from the rest of the city.

In the equal rights challenge that followed, the court noted that the lines around the city blocks had odd indentations leaving individual houses outside of the quarantine: where white people lived.  The court also noted that while the quarantine might protect the rest of the city, it actually made things worse for the Chinese-Americans living in Chinatown, who were not being quarantined from each other and who were being blocked off from healthcare providers.

In a rare early decision striking down a law as racially discriminatory, the court held that the quarantine was administered “with an evil eye and an unequal hand.”

As President Trump originally imposed travel bans on Europe and not the UK, and as we worry more about the threat from without than within, we need to keep in mind the mistakes of our past and base public health measures on medicine and science—not bias and discrimination.

We have to ACT UP.

If gay men had waited for the government to save us in the early 1980s, we would have been completely wiped out, and a large segment of the U.S. population would have followed.

Instead, we created our own healthcare and support organizations, challenged and changed how drugs are developed, approved and priced in the U.S.—although there is obviously still more work to do—and demanded that society and the government pay attention and respond. Back then, we had a president who ignored us; today, we have one that only tells the truth when it is the most convenient lie.

But acting up means more than tweeting, posting, hoarding and isolating: It means deep and sustained action.

One of the most moving experiences in my life was attending meetings of ACT UP’s Treatment Advocacy Group in the early 1990s: a fairly small group of gay men coming together in a small, dingy room. Some had been in theater or fashion and some had research backgrounds—but they all dropped what they were doing with their lives and learned about the FDA, CDC and NIH; about retroviruses and clinic trials; until they could go toe-to-toe with the experts and push the science and medicine—and eventually the testing and treatment—forward.

We have to be that involved—especially as COVID-19 evolves, as it will, into a disease of the poor and disenfranchised.

We need more than a vaccine; we need universal healthcare.

Recently, I watched several documentaries about the rise and fall of ACT UP. They all point to the same divisions preceding the fall—a difference about whether the fight against AIDS was specific to getting “drugs into bodies” or had to take on all the underlying disparities that allowed HIV to thrive.   And in the end, this became a debate about universal healthcare.

That division—and the fact that by 1996 we could get effective drugs into bodies—was the undoing of ACT UP.  A functional cure for those of us who are the most privileged (I was diagnosed with AIDS in 1995, and have an undetectable viral load since 1996) dissipated the movement.

In the intervening years, Hillary Clinton, Barack Obama, Elizabeth Warren and Bernie Sanders have all called for universal health care, or Medicare for All, but in each case (at least it appears now), they and we have fallen short of the goal.  This crisis creates another moment to change that.

When Warren and Sanders are being taken to task for the cost of universal health care, somewhere in the ledger we need to record the costs of the HIV epidemic, and the costs of COVID-19.

Of course, universal health care would not solve everything—Europe is showing us that—but it would greatly flatten the cure.

As Rep. Katie Porter so expertly demonstrated through her close cross examination of the director of the Centers for Disease Control and Prevention Robert Redfield this week, people will not get tested for COVID-19 because they fear the costs of testing and treatment—and quite frankly because they are just unfamiliar with how and when to access healthcare because doing so has not been a routine part of their lives.  The costs to lives, to productivity, to the global economy will be in the trillions.

We should not let this moment of crisis pass, again, with the success of the first vaccine.  The vast majority of us will survive COVID-19, but the next epidemic will come, and the one after that.

What we can do now to fight those epidemics is to continue to fight discrimination and inequality in our society and make healthcare accessible to all.

Brad Sears is Associate Dean for Public Interest Programs and David Sanders Distinguished Scholar of Law and Policy at UCLA School of Law. He was the founding director and Executive Director of the Williams Institute, a national think tank on LGBT law and policy. 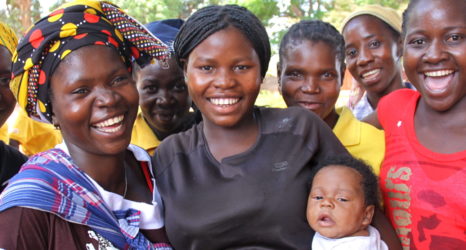 Data is Driving Success in Life-Saving Interventions for Women and Girls—Why Isn’t it Driving Policy?

DOJ Files Emergency Motion to Stop Texas Abortion Ban, with Support from Democratic Attorneys General
Texas’s Abortion Ban Is Already Causing a Brain Drain in the State. Will Companies Speak Out?
Our Abortions Are Our Business—No Explanation Required