A roller skating fundraising campaign for Navajo health during the pandemic? At first I thought I had misunderstood my colleague Daisy Purdy’s comment over email. She had written that she might be hard to reach because she would be driving across country, to go to Arizona to begin a roller skating fund-raiser.

What? This was in early June of 2020, and much of the world was still on varying degrees of COVID-19 pandemic lockdown.

She’d mentioned something about roller skating from Navajo Nation in Arizona … to Eastern Band Cherokee lands. Roller skating cross-country during a pandemic?

I wondered—was this a good time to be organizing such an event, one that would be daunting in the best of times? But of course, the Navajo Nation is among the hardest hit locations in the world, with the highest per capita COVID-19 infection rate. So awareness and pandemic relief is needed now—not at some later more convenient time.

Once Daisy shared a link to RollerRock.org, I jumped onto the site and saw the GoFundMe page: a smiling picture of Daisy Purdy and Dr. Tommy Rock, whose research on environmental contamination Daisy’s skate would support.

I scrolled through the website, wondering about logistics: Who would be skating? How far? How would they manage support breaks, bathrooms and travel—when “non-essential travel” was still somewhat restricted and would involve a patchwork of states with radically different laws and policies around quarantine and access?

And then came a text, “The internet on Navajo Nation can be sketchy … so I may be hard to reach.” Again, that jarring reminder that an internet seemingly ubiquitous to me as an East Coast college professor is far from democratically distributed.

The devastating health disparities across racial, ethnic, tribal and other lines, now magnified significantly amidst the pandemic, have finally registered with a flicker in some mainstream news. Yet, the media and general public seldom recognize root causes of the greater impact and death rates among brown, Black and Indigenous people relative to whites.

Health disparities are often discussed as if Black bodies are different from white bodies—as Joanne Augustin (R.N., B.S.N., Moravian College 2020) taught me. Augustin argues systemic, structural racism is largely responsible for disparate rates of infections, and different health outcomes for those infected. Health disparities are not inherent to people’s bodies—whether by supposed genetic or biological differences; rather, they are about systems and structures.

What are the contexts and causes of the egregiously bad health outcomes for BIPOC relative to Euro-Americans/whites? Without unpacking those, people tend to rely on assumptions and ideas of inherent biological or cultural differences to explain (and often justify) the very social determinants of health.

When mainstream people hear of sky-high Indigenous infection, illness and death rates with COVID-19, do they know about structural death-promoting, anti-Indigenous policies? Or do they think merely of stereotypes about Indigenous individuals and their health choices, thinking, “It’s a shame Indians are so ___________” [insert negative stereotype].

I ask, “Is there a map showing their route cross country?” and she replies that it may not be safe to be too public about her route, since some people seem to be unenthusiastic about an Indigenous woman skating across what they think of as “their land.”

As it sinks in with me that Daisy has begun personally skating nearly 2000 miles, I ask how it is going, and how her feet are holding up. She replies, “I feel so much better to be out and doing something.”

All of her trip expenses are coming out of her own pocket, so that 100 percent of the funds raised can go directly to Dr. Rock and his project—so she’s not spending money on hotels or anything, meaning that she frequently lacks access to showers or other basic conveniences.

I ask, “So you are mostly camping?”

“Campsites? No, we are not spending money on campsites either. We just park somewhere and sleep in the car.”

In case you hadn’t gathered so far, this is a solo skate. Just Daisy, alone. Though, like the misnomer of “social distancing,” Daisy says that she is not skating alone, that the ancestors are with her, that folks are offering in person and online support.

Not Charity, But Justice; Not Imperialist Feminism, But Transnational Solidarity

Some may imagine Daisy as an exceptional heroic individual, defying stereotypes about Indigenous people with brute force and determination, a consummate “rugged individualist.” Allowing no barriers to hold her back from her mission, powering through obstacles, with the ego strength to carry her forward. So different from so many Indigenous people, who are [insert negative stereotype implying dysfunction, broken-ness, victimhood and the like].

But no—she keeps sharing how supported she is, how the ancestors are guiding her, and how many folks are helping out along the way, and recognizes that her physical abilities—like her Ph.D. (or her pending second Ph.D.)—are not because she is so special, so different from other Indigenous people, but rather because brilliance and determination are everywhere in Indian Country, though settler-colonialist mentalities keep us from recognizing it.

And, speaking of settler colonialism, recall that the 2000 miles Daisy skates are mostly across stolen land.

She has been stopped by police (pulled over on her skates), about once every two days. Police officers got in her face to say it was against the law to skate on public roads, and sometimes to physically prevent her from doing so. Many have spoken right in her face, without masks on, during this pandemic. When she politely asked police officers to put on masks, some denied that they needed a mask, and said “You don’t need one either!”

These are unceded Native lands, she notes to herself on social media and in her blog. She does not recognize these “law enforcement officers” to have ultimate authority over these lands—her lands, and her ancestors’ lands.

Other law enforcement officers were supportive, once they recognized what she was doing and showed some respect for her project. Some led her to more remote and scenic routes, which proved to be safer and more interesting, anyway.

In the current “unprecedented times,” it may be tempting for people to isolate and defend themselves again the onslaught of a terrifying world, to become more individualist and in-group focused and myopic, focusing only on one’s own family. People are seeking private ways to spare their children from risk of infection, and making “pods” that reinforce educational disparities rather than pushing for public education and health policies that protect every child, family, community, and their well-being and learning.

This skate embodies a different kind of strength—one that is communal in nature. With minimalist design and implementation, Daisy is clocking miles and miles. Her Great Skate, and Dr. Rock’s health project, are deeply collaborative, empowering, showing the limitations of a zero-sum scarcity-minded perspective.

So what enables a person to undertake 2000-mile cross-country skate fundraiser? It is partly that she had the imagination to believe she could.

Her proactive approach already comes through in her work with Dr. Tommy Rock, understanding the legacy of uranium mine damage to so many Native people, and not just posting about it on the internet (with “Slacktivism”) but rather cooperating with his intergenerational story sharing, environmental research project, which lays groundwork for understanding why COVID-19 has so decimated Navajo people.

The project documents how generations of respiratory and other damage from environmental racism and uranium mining, plus scarcity of healthcare, clean running water, and other conditions have primed the Navajo population to be particularly susceptible to this respiratory virus.

As she skates, she raises awareness on the pandemic, its particular impact on Navajo and other Indigenous peoples and raises funds toward direct aid and long-term research.

Carol J. Moeller, Ph.D., is an activist/scholar philosophy professor and Director of Research and Education for Diversity Equity and Inclusion at Moravian College in Bethlehem, Pennsylvania. She wants to be a feminist freedom warriorwhen she grows up. 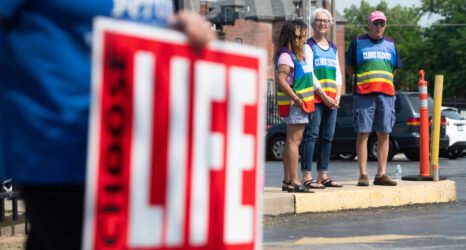 In the Wake of Roe, Violence Will Increase. Healthcare Workers Must Be Protected