The award of a Nobel Prize to two women, for what has been called one of the greatest breakthroughs in biomedical history, is remarkable on its own—but all the more because of the challenges put in their way.

This Thursday, Dec. 10, the Nobel Prize in Chemistry will be awarded to the all-women team of Jennifer Doudna and Emmanuelle Charpentier for the development of CRISPR Cas-9.

CRISPR is the relatively cheap and easy gene editing method that has captured the world’s imagination and has the potential to revolutionize medicine. By giving biologists the ability to directly edit DNA sequence, CRISPR brings any genetic disorder within reach—even cancer.

In the history of the prize, this marks only the second time that a Nobel for work in genetics was awarded exclusively to women—the other being Barbara McClintock in 1983 for her discovering of “jumping genes.”

A Long History of Writing Women Out of Scientific Discoveries

The award of a Nobel Prize to two women, for what has been called one of the greatest breakthroughs in biomedical history, is remarkable on its own—but all the more because of the challenges put in their way.

Almost from the moment Doudna and Charpentier published their work, they were embroiled in a well-publicized patent battle with a group from the Broad Institute at MIT and Harvard who wanted to claim credit for CRISPR Cas-9. This group was spearheaded by the Eric Lander and his infamous essay, “The Heroes of CRISPR.” Many saw this attempt to steer public opinion and secure patent rights as driven by sexism from the old boys club of genetics. In fact, Michael Eisen, a biologist at UC Berkeley and investigator of the Howard Hughes Medical Institute, went so far as to call Lander an “evil genius.”

The award of the Nobel in Chemistry to Doudna and Charpentier speaks volumes, as a Nobel Prize can be awarded to up to three people—and the exclusion of researchers at the Broad Institute did not go unnoticed. The challenges these women faced are just the most recent in a long history of minimizing the important role women have played in genetics, starting from early in the field.

When people think of the origin of genetics, they often think of Gregor Mendel and the discovery of genes through his work with peas. But it was William Bateson who coined the term “genetics” and who was arguably one of the biggest contributors to modern genetic research.

As with many major scientific endeavors, he did not do it alone. In addition to naming the field, he organized and led the first (unofficial) genetics program. This was during his time at Cambridge and over half of his students were women from the associated Newnham College. Bateson had a genuine interest in promoting women in science and used his connections at Newnham to recruit women students and research assistants for this burgeoning field. Although genetics certainly would exist without Bateson’s program, the contributions of these women cannot be overestimated.

Despite teaching genetics for almost 20 years, I was unaware of the contributions of these women until this summer when I found a paper by Marsha Richmond, a historian of biology at Wayne State University. Her essay covers this period of genetics between 1900 and 1910 that I summarize here. Although Cambridge University was at the forefront of women’s education, with the establishment of Girton College in 1869 and Newnham College in 1871, entry into science careers was still very limited for women.

Women were allowed to sit for the honor exams at Cambridge and regularly earned high scores, but in 1897 a petition for women to be granted university degrees was rejected. Despite these hurdles, there was an increase in women interested in postgraduate research. Opportunities were scarce, but among them were Bateson’s lab and the Balfour Biology Laboratory for Women.

By 1890 Bateson began work with his sister Anna, one of his first collaborators. Anna was an assistant in botany to Francis Darwin through the Balfour Laboratory and she published five papers—although she ultimately left research to establish a nursery.

By 1895 Bateson undertook studies with Rebecca Saunders, an established botanist of the Balfour Laboratory. Bateson had been interested in heredity and evolution since completing his degree in 1883, but the appointment of Adam Sedgwick as director of the Morphological Laboratory in 1886 curtailed his progress as Sedgwick considered his work to be a “fancy subject.” Saunders and Bateson persisted, however.

From 1896 to 1897, the Degrees for Women campaign (where Bateson served as a committee secretary) fought to allow female students to officially earn degrees from Cambridge. The campaign was ultimately unsuccessful, and shortly after that, Sedgwick started a trend by prohibiting women from research at the Morphological Laboratory and from attending introductory biology courses.

But by 1899 Saunders was appointed director of the Balfour Laboratory, and Bateson was able to secure a course in heredity and evolution that same year. With the rediscovery Mendel’s work in 1900, studies in heredity were completely transformed, and they quickly pivoted to apply the new laws in their research.

The work was too much for Saunders and Bateson to carry out by themselves, however.  Through the Balfour Laboratory and Bateson’s sister (an alum of Newnham), they were able to recruit women students and research assistants for a new genetics school and research program, among them Charles Darwin’s granddaughter, Nora Darwin, who was not a student at Newnham but was connected to Cambridge through her uncle Francis.

The work done from 1900 to 1910 by this mostly female group contributed to the fundamental understanding of genetics, developing and extending Mendelian principles. Saunders and Bateson helped to refine the study of genetics by introducing several key terms now found in general biology courses, such as “allelemorph” (now “allele”), “heterozygote” and “homozygote.” Saunders, Florence Durham (a lecturer at Newnham) and Muriel Wheldale helped solve a problem that initially appeared contrary to Mendelian genetics by showing that genes could interact with one another (epistasis).

The work was often carried out independently, and major results were obtained through careful observation and experimentation. In a book written in 1982, the prominent evolutionary biologist Ernst Mayr remarked that after reading Bateson’s 1909 book Mendel’s Principles of Heredity he was, “surprised at the maturity which the understanding of Mendelian inheritance had reached so soon after 1900.” The women at “Bateson’s school” from 1900-1910 made fundamental contributions to this understanding.

Unfortunately, many of the women trained under Saunders and Bateson left science. But there were some notable exceptions. Wheldale established an important connection between heredity and the biochemistry of traits and had continued success in biochemical research. Dorothea Pertz became one of the first women to be admitted to full membership in the Linnean Society, the world’s oldest professional society dedicated to biology.

This program only ended because Cambridge was slow to adopt genetics as a field of biology. While Bateson was given a position in biology there, it was a short-term appointment. Given his tenuous position, he made the decision to direct the John Innes Horticulture Institution, where he had more difficulty recruiting students away from the resources they had at Cambridge.

Saunders remained at the Balfour Laboratory but increasingly became interested in morphological problems. Although Bateson himself was quick to acknowledge his female collaborators and assistants (coauthoring papers with many), the contribution of the Newnham women is not widely recognized today.

The Continued Underrepresentation of Women in Science

More recently in the 1970s to 1990s women were given simple acknowledgements for work that would normally warrant the higher status of authorship. This is more than just a question of professional pride—publications and citations are the currency of academia and determine hiring and promotion. Using a metanalysis and binary gender categories, Samantha Dung and colleagues found that a disproportionate number of women were placed on the sidelines in the field of theoretical and computational population genetics despite major research contributions

Several of these women were found only in the acknowledgments of multiple important papers—in particular Margaret Wu. Wu contributed without authorship to highly cited articles (one with over 3400 citations at the time this study was published). The authors found that this trend began to shift in the 1980s, but this still constitutes hiddenness of women to significant contributions to genetics.

In 2014, Jason M. Sheltzer and Joan C. Smith surveyed employment records among highly ranked colleges and universities and their elite research labs (where among other things principle investigators were members of the National Academy of Sciences, or had been awarded the National Medal of Science or the Nobel Prize). Among labs run by Nobel laureates in particular, they found a 39 percent deficit in female postdocs and a 27 percent deficit in female graduates compared to percentages in the pool of trainees.

This indicates a decrease in representation up the career chain. Determining the cause is difficult due to the informal process of postdoc and graduate student recruitment, but the old boys club in this male dominated field is certainly a contributing factor.

The recognition of the work by Doudna and Charpentier by the Nobel Committee provides an opportunity to bring to light the contributions of women to genetics. Jennifer Doudna has demonstrated her interest in accessibility surrounding CRISPR Cas-9 technology (I had an opportunity to meet her in 2017 and she told me she had plans for an educational kit to be provided to schools free or as cheaply as possible.)

Although the two women have emphasized that they’re scientists first, they are proud of the example they set for young women in science.

Hopefully Jennifer Doudna and Emanuelle Charpentier can use their influence as Nobel laureates to increase the opportunities for women in biomedical careers. The historical contributions alone have certainly earned women a more prominent place in genetics.

Note: I emphasize Doudna and Charpentier here because their recent Nobel Prize is the impetus for this essay—but so as to not commit the same oversights criticized above, I recommend the essay, “The Unsung Heroes of CRISPR” by Heidi Ledford in Nature, 2016.

‘A Whole Generation of People Who Don’t Know How To Take Care of People’: Training Ob-Gyn Medical Residents In a Post-Roe World 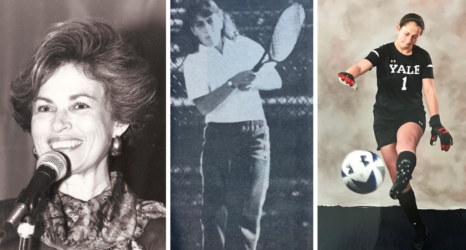