Trump is exhorting throngs of loyalists, deluded by his incessant but baseless claims of voting fraud, to join in his sedition.

This post originally appeared on The Fulcrum. It has been republished with permission.

As the most stressed-out election since the Civil War’s aftermath comes to an end, this is what democracy looks like:

It may be the middle of the night when the last fruitless protest plays out at the Capitol, but the outcome of the Electoral College count will be clear and decisive and just what the Constitution calls for: Joe Biden’s presidential victory will be affirmed without being sullied or discredited.

Georgia, long the centerpiece of a Jim Crow South where voter suppression was the norm, has elected its first Black senator and is on the cusp of delivering to the new president a Congress controlled by his allies—following Senate runoffs marked by enormous turnout along with newfound and essentially complete credibility.

And the titular leader of the American democratic republic for another two weeks, Donald John Trump, is devoting all his waning presidential power to discrediting those twin victories for a resilient system—and exhorting throngs of loyalists, deluded by his incessant but baseless claims of voting fraud, to join in the sedition.

“We will never give up. We will never concede. It doesn’t happen. You don’t concede when there’s theft involved,” Trump told a raucous crowd of tens of thousands of his most ardent supporters at a noontime Wednesday rally, the White House as his background. “We won this election, and we won it by a landslide.”

“We will stop the steal,” the president declared, asserting that reversing an election he clearly lost is essential “for the sake of our democracy.”

His supporters, many waving flags but few in masks despite the surging coronavirus, marched two miles to Capitol Hill to and soon caused so much disruption that congressional office buildings were locked down. Two were briefly evacuated. Along with the Capitol Police, D.C. police and National Guard troops were bracing for violent clashes like those Tuesday night across a downtown largely boarded up and free of cars.

The pro-Trump protesters vowed to remain confrontationally on hand throughout the joint session of Congress that convened in the afternoon, the rebellious voices Trump had exhorted shouting outside and marking a historic turn of events: Every other time since the 19th century, the ceremony has been a formal but foreordained capstone after every presidential election: the opening and tallying of the electoral votes submitted from across the country, and challenged only a scattered handful of times before.

In the nine weeks since Election Day, the presidential election results from every state have been certified as fair and accurate—by Republican and Democratic officials alike. Biden, who won 7 million more votes than Trump from the people, carried 24 states and D.C. with 306 electoral votes. Trump carried 232 electoral votes and won 47 percent of the popular vote.

Trump’s former attorney general, William Barr, has said there was no fraud in the election sufficient to call any of the results into question. And more than 50 lawsuits by Trump and his allies have been rejected by judges across the country—two of them by the conservative-dominated Supreme Court.

House Republicans are signing on to objections to the electoral votes in six states, with a combined 79 electoral votes, that Biden carried: Arizona, Georgia, Nevada, Michigan, Pennsylvania and Wisconsin.

At least one senator must also sign on to each challenge, and that happened as soon as the envelope from Arizona (third in alphabetical order) was taken from the ceremonial mahogany boxes used only once every four years. The House and Senate then went to their own chambers to debate the first challenge separately, with votes after two hours. It’s a near certainty all challenges will be rejected in the Democratic House and a Senate where at least half the Republicans will joining the Democrats in voting them down.

Vice President Pence presided and has been under intense pressure from Trump to break the law and seek to push the proceedings in the president’s favor. “All Mike Pence has to do is send them back to the States, AND WE WIN,” he tweeted Wednesday, flatly incorrectly. “Do it Mike, this is a time for extreme courage!”

Pence issued a statement just before the session convened promising to rebuff Trump and follow the rules.

GOP Leader Mitch McConnell delivered an impassioned speech to the Senate urging more than a dozen of his colleagues to back off their threatened challenges, which are founded in suspicions of election irregularities but have no credible supporting evidence. He stressed the conservative argument that Congress has no business overruling election decisions made by the states. And he warned democracy would descend into a “death spiral” if those losers of future elections could reverse the outcome in Congress.

“The voters, the courts and the states have all spoken,” he said. “They’ve all spoken. If we overrule them, it would damage our republic forever.”

The last four years for McConnell have been marked by an almost entirely unbroken string of appeasements of the president, or at least avoidance of conflict, but since members of the Electoral College voted across the nation three weeks ago he has been emphatic in his view that the time for challenging the results are over and he wants to be part of the orderly transfer of power that’s been a hallmark of American democracy.

His normally ironclad control over his caucus has eluded him this time, however—entirely because GOP senators confronting 2022 re-election primaries, or hoping to make 2024 presidential runs, have put a premium on staying on the right side of Trump and his passionately loyal base.

McConnell says they are free to vote their “conscience” in the coming hours, which could be among his last as the majority leader.

If Jon Ossoff holds on to his razor-thin lead over Republican David Perdue, whose Senate term at least temporarily expired this week, then he and the Rev. Rafael Warnock, who ousted appointed Republican Kelly Loeffler from the Senate on Tuesday, will bring the number of Democratic senators to 50 and they can claim the majority after Inauguration Day because Kamala Harris will be the tie-breaking vice president.

More than 4.4 million Georgians voted in each contest, an extraordinary outpouring of civic engagement for a special election right after the holidays and nearly equal to the 5 million who turned out in the fall. Complaints about long lines were minimal, as were problems with the state’s new high-tech voting systems, and allegations of people improperly turned away from the polls were essentially nonexistent.

“Nobody said they were disenfranchised,” Gabe Sterling, a senior GOP state voting official, told reporters on Wednesday. “Everybody seems satisfied. This is extraordinary.”

Trump told the rally that election officials in Georgia, who are all Republicans, “cheated like hell.”

David Hawkings, editor in chief at The Fulcrum, was most recently the senior editor of CQ Roll Call, writing columns for each publication and hosting the "Roll Call Decoder" series of videos and podcasts. He spent six years as managing editor of CQ Weekly, when the magazine won two Dirksen Awards for coverage of Congress, and before that supervised all legislative coverage and was managing editor for daily news. 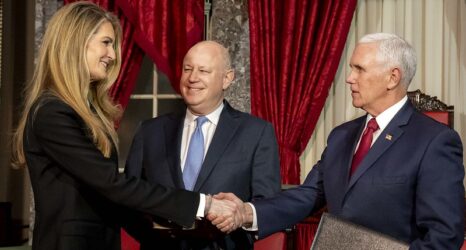 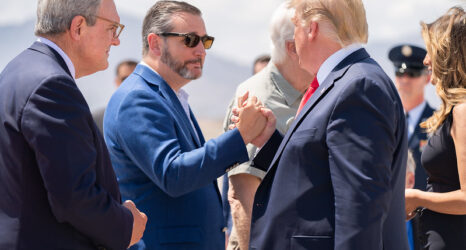