The Power of State Courts in Securing Abortion Access: "It’s Time to Give Them Center Stage" - Ms. Magazine
Skip to content

The Supreme Court’s early September ruling on Texas law S.B. 8 was a chilling moment, but also a clarifying one. In a single paragraph, a 5-4 majority allowed a law banning most abortions to remain in effect while legal challenges wind their way through the courts.

The Court is now considering again whether to block the law, but its abdication of judicial responsibility has been a wake-up call. Progressives are giving new attention to reforming the Supreme Court—but it would be a mistake to stop there. We also need to pay greater attention to state courts and state constitutions as a promising, underappreciated and frequently threatened venue for protecting abortion rights.

Why focus on state courts? A key feature of our federal system is that state courts get to interpret their own state’s constitution and other laws. Therefore, it’s state supreme courts, not the Supreme Court, that get to be the final word in interpreting the meaning of state constitutional provisions—and they can interpret them to go farther than the federal constitution in establishing and protecting rights. In other words, when it comes to protecting civil and human rights, the U.S. Constitution functions as a floor, not a ceiling. With state constitutions, you can build a skyscraper.

This isn’t news to reproductive rights litigators, who have increasingly looked to state courts as promising venues. Consider Kansas and Iowa, where in the past three years state supreme courts have issued rulings protecting abortion rights—all under their state constitutions. Yet the broader progressive movement has paid surprisingly little attention to state courts—not who sits on them nor how to defend them when their rulings prompt political attacks.

When it comes to protecting civil and human rights, the U.S. Constitution functions as a floor, not a ceiling. With state constitutions, you can build a skyscraper.

It’s now a well-trodden story that for decades progressives ceded attention about the importance of the courts to the right. The triple-punch of President Trump’s Supreme Court nominees—and the political hardball that got them each a lifetime seat on our nation’s highest court—has been a belated wake-up call for many. But even as federal judicial nominations attract greater attention on the left, state courts continue to largely fly under the radar—even while conservative groups pour resources into building state supreme court majorities.

For example, even though judicial elections are widely used in the states, there’s been little by way of a “progressive judges” movement akin to what we’ve seen in elections for prosecutors. Nor have progressives regularly sought out spots on powerful judicial nominating commissions, which are used in many states where governors appoint judges to vet candidates and provide a binding shortlist.

And there’s been little attention given to the stark lack of diversity on state supreme courts across the country, where women hold only 39 percent of state supreme court seats, people of color are completely absent from high court benches in 22 states, and justices with professional backgrounds working with poor and other marginalized communities are rarely found.

President Trump’s Supreme Court nominees were a belated wake-up call for many. All the while, state courts continue to largely fly under the radar—including their stark lack of diversity.

Equally troubling is what’s happened in many states when courts have issued rulings out of step with entrenched political interests. In 2019, for example, Alaska’s governor used his line item veto authority to strip $335,000 from the judiciary’s budget after the Alaska Supreme Court issued a ruling requiring state funding of certain abortion services. It’s part of a broader trend where rulings on issues such as abortion rights, voting rights, education equity and death penalty abolition have all put targets on state courts in recent years—including impeachment campaigns, efforts to strip away courts’ power, and moves to give politicians more control over judicial selection.

From January through May, at least 26 states introduced at least 93 bills that would politicize or undermine the independence of state courts. All too often, these efforts have flown under the radar with little to no mobilized opposition.

Of course, state courts can only go so far in filling the reproductive rights chasm that the U.S. Supreme Court has opened. To state the obvious, state courts in many of the places most likely to attack reproductive rights may not have judges ready to defend them. Courageous rulings can also prompt backlash, including efforts to amend state constitutions—an anti-abortion amendment is set to go on the Kansas ballot in 2022—or to target justices up for reelection or reappointment. Fears of backlash can itself also make state courts timid. But with federal rights increasingly at risk, it makes sense to use every available tool and to invest in building fair courts that can be on the vanguard of protecting reproductive rights.

The decades since Roe v. Wade make clear that courts can’t be the only path to achieving reproductive justice—but also that we won’t have reproductive justice without them.  State courts have usually been afterthoughts in these strategies. It’s time to give them center stage. 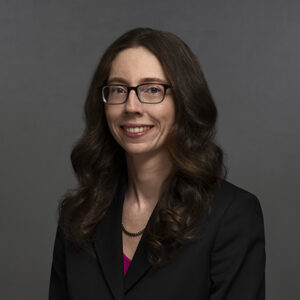 Alicia Bannon is managing director of the Brennan Center’s Democracy Program, where her work focuses on promoting a fair judicial system and an inclusive democracy. Find her on Twitter:@alicia_bannon