Then + Now: Celebrating YOU – Ms. Magazine
Skip to content 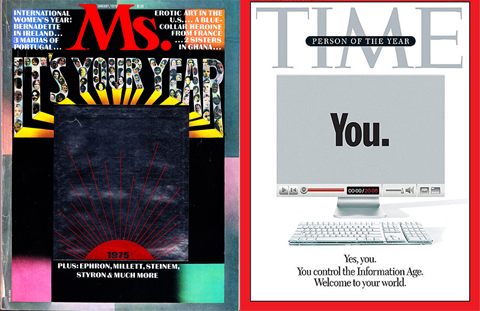 The January 1975 cover of Ms. (left) celebrated International Women’s Year by using a mirror to evoke the reaction, “Holy moly! I’m on the cover of Ms.!” Thirty-two years later, in 2007, Time magazine declared “YOU” its “Person of the Year” (right) in recognition of the ascent of YouTube and other information-sharing networks. Both covers are meant to empower; do they succeed?

From the Stacks: Dewar’s Man and Dewar’s Woman