From the Stacks: Dewar's Man and Dewar's Woman - Ms. Magazine
Skip to content 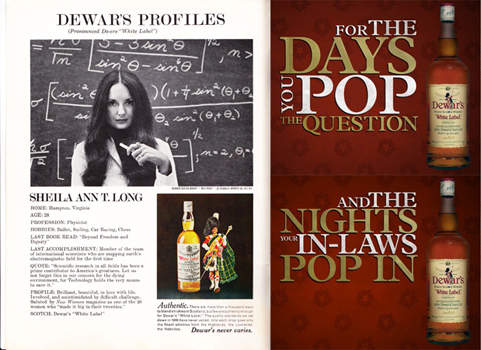 This 2008 Dewar’s ad (right) is a timeless example of how ad campaigns market to men using sexist gender stereotypes. Because we all know that men do the proposing and are deathly afraid of in-laws! There’s also the troubling suggestion that instead of experiencing real emotion, men should numb themselves with this bottle of Dewar’s scotch.

So what happens when liquor companies market to women? This Dewar’s White Label ad (left, see larger image here) from the November 1972 issue of Ms. portrayed a “liberated,” scholarly woman who shows she can be feminine as well as “one of the guys.”

If the newly empowered woman could enjoy ballet and car racing, the premise went, then certainly she could relax with a traditional man’s drink: Dewar’s scotch.

But this effort to cater to feminists feels thin. Why the reassurance that feminists can still be “feminine” (signified by her hobby of ballet)? Why the assumption that we’re itching to join the boys’ drinking club? Why the young, white, college-educated feminist? This stereotype of a 1972 Ms. reader places feminists in a box created by a small group of (probably male) marketing executives. It may have been a new box, and one that seems novel even now, but it’s still a box.

Gender stereotyping is prevalent in most, if not all, marketing campaigns. Ms. founder Gloria Steinem fought tooth and nail to improve and transform the way companies marketed to women, but the ads that came into Ms. were more often than not just superficially feminist.

How can we achieve actual non-sexist advertising? I would urge companies to let go of gender-based marketing entirely and create gender-neutral campaigns. Ms. decided at one point to forgo paid advertisements to preserve editorial standards, and these days the magazine’s ads feature nonprofits and other groups in line with a feminist mission.  Even with this policy,  Ms. manages to keep its subscription price to $25/year ((SHAMELESS PLUG: subscribe here!). Now that’s something to drink to!