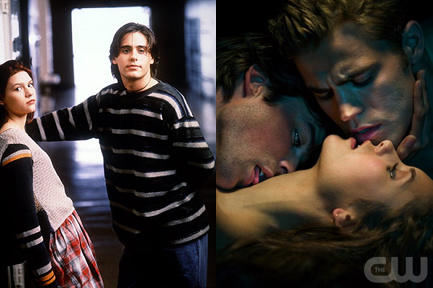 At the risk of sounding like a crotchety old twit at age 23, I have to say: Ad campaigns for TV dramas that target teen girls seem incredibly raunchy these days. I grew up watching quirky, grungy 90’s protagonists like Angela from My So-Called Life (premiered 1994), Clarissa of Clarissa Explains it All (1991) and Spike from Degrassi High (1989). Beverly Hills 90210 (1990) and Melrose Place (1992) offered steamier plotlines but the same sexless high-waisted Levi’s and floppy hats.

But now impressionable viewers are offered Gossip Girl, The Vampire Diaries and Fly Girls (yuck!), whose female protagonists all sport empty stares and the same generic cocktail dress. I don’t want to end up with more pseudo-alternative shows like My Life as Liz, which was awarded Bitch‘s Douchebag Decree, but I (and hopefully others) need another Angela: a non-conformist with interests, who can be dramatic and sexual without being petty and pornographic.