Race and Gender Stereotypes are Everywhere—Including on Your Cereal Box - Ms. Magazine
Skip to content

How about some race and gender stereotypes with that morning bowl of cereal?

After 80-plus years on the market, Wheaties has put more muscle in its brand by launching Wheaties Fuel. Billed as a cereal “By Champions. For Champions,” the re-branded carbfest has the distinction of being the first cereal aimed intentionally at men.

Each serving contains 210 calories and 5 grams of fiber, but General Mills left out folic acid—which was deemed too girly because it is used as a common pregnancy supplement. At the same time, General Mills touts Fuel’s five B vitamins for their key role in those gender-loaded nouns endurance and stamina.

Now look at the faces on the new Wheaties boxes and you’ll find more than your recommended daily allowance of race and gender stereotypes. There’s only one woman—a Sports Illustrated bikini model and, oh yeah, Olympic ski champion Lindsay Vonn—and the rest are men.

Dominican-born baseball star Albert Pujols rates lower on the friendliness scale, with a semi-glaring visage that is more “I dare you” than “Tell me your tender secrets.” 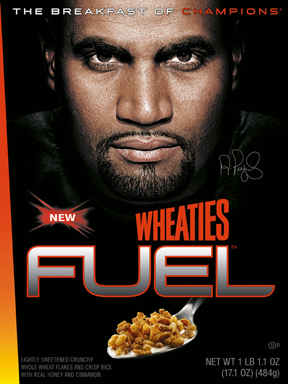 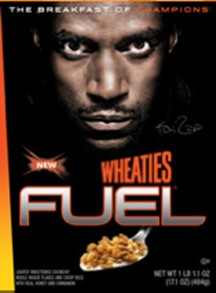 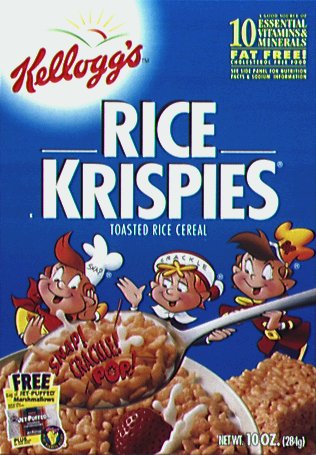 Imagine a child wheeled down the aisles gripping the sticky handle of a grocery-store cart, skimming by at eye level with so many shiny products and images designed to grab her allegiance. That child’s brain soaks up her surroundings like a sponge. The buy-me message is wrapped in powerful messages about gender and race.

Some people wonder where we learn race and gender stereotypes—which contribute to racism, sexism and narrow images of black masculinity. We learn them everywhere, including the seemingly innocuous cereal aisle.

With its repurposed Breakfast of Champions, Wheaties Fuel may as well be called the Breakfast of Stereotypes.

CORRECTION: This post originally identified Albert Pujols as Cuban-born; he is in fact from the the Dominican Republic; post updated to reflect.