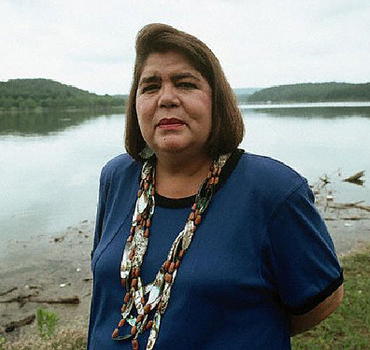 Wilma Mankiller, one of the few women ever to lead an American Indian tribe, has passed away at age 64 at her home in rural Oklahoma. Her husband, Charlie Soap,  announced a month ago that she had been diagnosed with pancreatic cancer.

Mankiller served as principal chief of the more than 200,000-member Cherokee Nation from 1985 until her retirement in 1995. Said Chad Smith, the current principal chief,

We feel overwhelmed and lost when we realize she has left us but we should reflect on what legacy she leaves us. We are better people and a stronger tribal nation because her example of Cherokee leadership, statesmanship, humility, grace, determination and decisiveness.

Mankiller was close friends with Ms. cofounder Gloria Steinem, who was at her house this past week. Steinem was wed to David Bales at Mankiller’s home in 2000, with Soap conducting the ceremony along with an Oklahoma judge.

In the press release announcing her illness, Mankiller wrote:

I decided to issue this statement because I want my family and friends to know that I am mentally and spiritually prepared for this journey, a journey that all human beings will take at one time or another. It’s been my privilege to meet and be touched by thousands of people in my life, and I regret not being able to deliver this message personally to so many of you.

In her book Every Day Is A New Day, Mankiller thanked her parents “for never telling me, ‘Girls can’t do that,’ and for letting me define for myself what it means to be a woman.” She also wrote about her adolescence in San Francisco and her early marriage:

My husband expected me to step completely away from involvement in the Indian center and from my birth family. It was a tall order. I had an avid interest in social justice issues and the extraordinary world around me. At that time in San Francisco, there were many debates and discussions of Red Power, civil rights, and women’s rights. … There was a free-speech movement at the University of California at Berkeley and massive anti-war demonstrations throughout the Bay Area. By the time I was 23, any notion that I could live my life as a wife and mother as defined by my husband and the social constraints of that time was gone forever. I became involved in the community, started thinking about attending college, and the beehive hairdo, makeup and heels were replaced by long straight hair and sensible shoes.

She also wrote about the changes for Cherokee women over the time she was involved in tribal leadership:

When I first ran for election as deputy principal chief in 1983, it seemed the strong role of women in Cherokee life had been forgotten by some of our own people. I vividly remember a man standing up in a campaign meeting and telling me, ‘Cherokee Nation will be the laughingstock of all the tribes if we elect a woman.’

By the time I left office in 1995, after not seeking a fourth four-year term of office [as principal chief], there were fewer questions about whether or not women should be in leadership positions in the Cherokee Nation. If people opposed me, it was because they disagreed with my policies, not just because I am female.

Mankiller’s survivors include two daughters, Gina and Felicia, children of her first marriage.