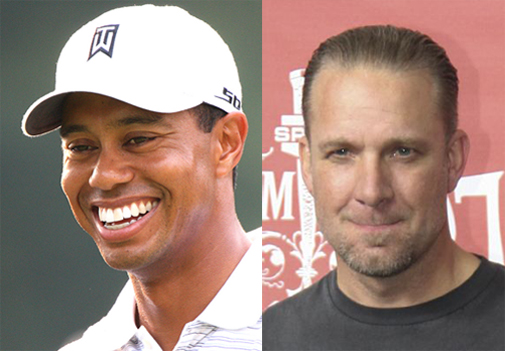 Cue: High-profile, charismatic man married to high-profile, attractive woman in picture-perfect marriage is outed by a long string of lovers claiming to have affairs (often lasting several years) that include everything from wild sex (often without protection) to pregnancies and abortions.

Response: The tabloids erupt in a media feeding frenzy and the public is outraged (usually because said man has cheated on attractive and likable wife with “trashy” “sluts“).

Skeptical? Yeah, so am I.

Jesse James follows the lead of David Duchovny and Tiger Woods and enters sex rehab to deal “with personal issues” that include a bevy of mistresses and a publicity nightmare. It sounds more like old-fashioned infidelity to me.

Their cries of sex addiction and subsequent decisions to admit themselves into treatment centers is vaguely reminiscent of gay-bashing conservative mega-church pastor Ted Haggard‘s decision to enter “gay camp” after his sexual encounters with a variety of male prostitutes were made public. Apparently, it worked. Haggard, his wife says, is once again straight and free from “homosexual compulsions.”

Sex rehab, gay camp–sounds like a convenient excuse to garner sympathy, shirk responsibility and restore one’s former reputation (oh, yeah, and their marriage to their wife).

Obviously I have not treated any of these men, but considering the fact only  six percent to eight percent of people in the United Sates qualify as sex addicts it’s hard to believe that these men automatically fall into that category. From where I’m sitting, their sexual exploits are behaviors encouraged in most men. After all, sexuality, sexual virility and having a lot of  heterosexual sex with a lot of women (often at the same time) is the cultural measure of a “real man,” and what is referred to as hegemonic masculinity [PDF] in academic circles.

The hyper-sexualized male is a standard fixture in pop culture and our culture in general. Why do you think The Forty Year-Old Virgin was made about a man?  It would have never been made about a woman. Women are supposed to be sexy, not sexual, and if a woman is a virgin at forty she’s probably just ugly or fat. If a man is a virgin at forty he must be gay or have a problem. Men are sexual beings, and if they’re not they’re not “real men.” Open any lad mag, like Maxim or FHM, and you’ll get loads of pictures of “hot babes” and articles on how to add notches to your bed post.

Married men aren’t entirely excluded from the sexual playground. It wasn’t historically uncommon for powerful married men to keep several mistresses in addition to their wives. In fact, it was encouraged. These days monogamy is heralded as sacred and normative, but if you’re going to cheat it should be kept on the down low. In fact, there’s plenty of advice and a plethora of gadgets that will help you cheat successfully. Take the iPhone app Tiger Text, which will help you “cover your tracks.” There are scores of websites and books that are willing to offer advice.

Are David Duchovny, Tiger Woods and Jesse James all sex addicts unable to restrain themselves? Possibly, but probably not. All three men share high-profile images, power and a sense of male privilege intersecting with the general expectations of “real men.” Their problem is probably not sex addiction but the fact that they got caught having affairs with “tawdry” women that marred their images in the eyes of the public that supports their lifestyles by consuming the pop culture products associated with their names.

To claim sex addiction is a cheap excuse that invalidates actual sex addicts, assumes the public is foolish enough to buy it and puts wives into the position of being grudge-holders if they don’t forgive their spouses for being “ill.” It also distracts us from having a public dialogue that examines the social construction of highly sexualized images of masculinity in our culture, which lies at the root of most of these cases.

Above right: Jesse James. Photo courtesy of http://www.flickr.com/photos/pinguino/ / CC BY 2.0

This is cross-posted at Feminist Fatale.