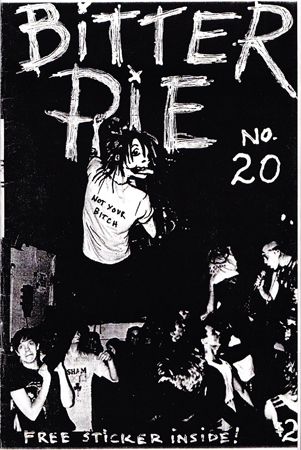 Self-published zines, pamphlets and comics have a rich history of political and social activism. They provide alternative thinkers with a cheap and easy way to connect with other like-minded people. Although not as widely circulated as national publications, the underground zine and comic network materializes in the form of symposiums, workshops, snail mail correspondences, pot-luck dinners and web libraries.

Charlott, the young woman protagonist, is strikingly emaciated, addicted to heroin and constantly on the road. The high density photocopying of the comic adds to the gritty feel of Charlott’s industrial surroundings and unkempt lifestyle.

In the newest issue, #20, Charlott is born anew. Fresh out of rehab, she focuses on piano, swimming, cliff jumping and boxing; she’s even gained a little weight. But despite Charlott’s transformation, people still view her as a junkie. The writing is darkly poetic:

Like a wound that never heals, Charlott is now regarded as an onion with only one peel! Forever branded as what one bought from those that deal.

The poetry is juxtaposed with speech bubbles from heckling ‘bros:’

Yeh…but don’t talk to her cuz she’s a damn junkie! I’d still do ‘er though!

These deceptively simple statements are layered with sexism, stereotyping, rape mentality and … a compliment? Despite Charlott’s great taste in music, she is automatically written off because of her past transgressions, yet still considered ‘fuckable’ because she has a vagina. Luckily a more supportive group of guy friends does appreciate her, but ultimately she is content with being alone, as long as she has music to turn to.

Charlott knows she’s just as good as all the world’s jerks … and she does find a lot of great records at work …which makes living easier … cuz love, it comes in spurts.

The comic is equal parts semi-autobiography, dark satire and female fantasy, celebrating independent women who are critical of society and spend their lives searching for moments that truly make them feel alive. 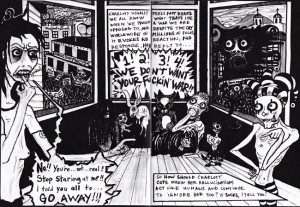 Pick up the latest issue of Bitter Pie at BitterPieComix.com