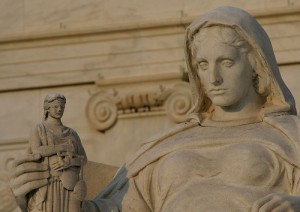 Should Obama be selecting Supreme Court justices based on gender?  Absolutely.

The gender composition of our current Supreme Court is a shameful reflection of the failure of our society to take gender equity seriously, so President Barack Obama’s nomination of Elena Kagan to replace Justice Stevens is a victory for women. But let’s not celebrate too soon:  Three women justices on our nation’s highest court would be a major improvement over the status quo, but it is still a far cry from adequate. If Kagan is confirmed, the Court will still reflect the disproportionate power that men continue to hold at the highest levels in American society.

Until 1981, all U.S. Supreme Court justices had been men. Only 29 percent of active judges currently sitting on the thirteen federal courts of appeal are female. Only 28 percent of active U.S. District Court judges are women.

Currently, with two women on the Supreme Court, the U.S. lags far behind some of the world’s other leading democracies in terms of gender equity on high courts. For example, the nine-member Supreme Court of Canada has four women justices (including the chief), and three of the seven justices on the High Court of Australia are women.

No candidate for the Supreme Court is perfect, and Elena Kagan is certainly no exception. For example, she has taken what many environmentalists view as a very troubling position on genetically engineered foods. She will undoubtedly have to answer to the left on this issue and others, as she should, but rather than delving into the substance of her legal philosophy and positions, the right wing is already hurling the same, tired “inexperienced” argument against her. That’s a term that, in the context of Supreme Court nominations, is often used by the right as a synonym for female.

Kagan certainly has the experience necessary to serve as a Supreme Court Justice–far more significant experience than, say, Clarence Thomas.  She was the dean of Harvard Law School.  Inexperienced?  Seriously? If the right wants to talk about experience, let’s talk about what Kagan brings to the Court in terms of life experience. In an unequal society, where women still earn 78 cents on the dollar (and that’s a generous figure) and are fighting tooth and nail to maintain their reproductive rights, Kagan brings a perspective grossly unrepresented on the Court: the profound experience of being female in our unequal social, economic and political climate. Her experience as a woman, which she will share with only two other Justices, is critical to the Court’s ability to respond to and protect the rights of more than 50 percent of the population. As Carolina Gonzalez wrote in Ms. after the nomination of Sonia Sotomayor, a judge’s life experience can be crucial in their decision-making:

Not surprisingly, according to several studies and to law scholars, racial and gender identity matters most in racial and gender discrimination cases. Women and African American judges rule in favor of discrimination plaintiffs significantly more often than white men. For example, a study drawing on 20 years’ worth of cases concluded that drawing an African American judge in cases involving workplace racial harassment makes it more likely that the plaintiff will win. Curiously, the effect of having women judges rule on gender-discrimination cases is greater when they serve on panels of three judges than when they rule alone from the bench. It seems that just the presence of a woman on a small panel of judges influences the others’ opinions.

As Obama and subsequent presidents continue to make selections for the Supreme Court and the rest of the federal judiciary, we can only hope that they will do so with a conscious focus on gender equality on the bench.  If they do, then a critical mass of women will eventually develop, and women will take their rightful place as equal partners with men on the highest court in the nation.

ABOVE: “Contemplation of Justice” statue on the Supreme Court Plaza. Photo from http://www.flickr.com/photos/bootbearwdc/ / CC BY 2.0

Justine Andronici is a feminist lawyer, advocate, activist and analyst who has been working in the women's rights arena for more than 20 years. She specializes in domestic violence, sexual assault, harassment and women's rights law and politics. She lives, works and writes from her home base in rural Central Pennsylvania. Connect with Justine on twitter at BendingtowardJustice @justineandronic