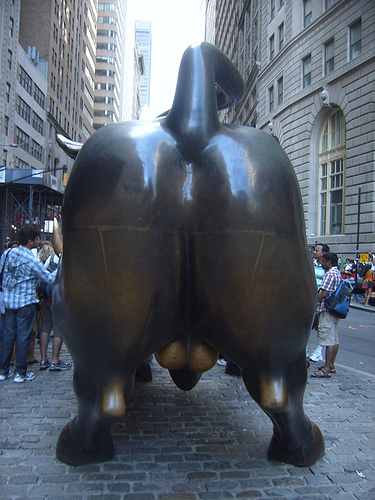 My high school science textbook taught me that aggressive sperm “penetrate” those docile eggs that float around in unassuming uteruses. Larry Summers told me that women lack a natural aptitude for the sciences. Now, Jack van Honk, a psychologist of Utrecht University in the Netherlands would have me believe that a healthy dose of testosterone (the “smart hormone” as the BBC called it) could make some women less gullible: “[I]n humans the hormone seems to motivate for rational decision-making, social scrutiny and cleverness, the apparent tools for success in a modern society,” van Honk and colleagues explain.

In the study, a group of 24 women volunteers were given a single 0.5 mg dose of testosterone and were then asked to rate the “trustworthiness” of photographs of strangers from “very untrustworthy” to “neutral” to “very trustworthy.” The testosterone had the strongest effect on “high-trusting” women (the “most socially naïve”) who were significantly less likely to trust unfamiliar individuals after administration of the hormone. The authors wrote:

We have repeatedly shown that testosterone administration in females results in more male-typical social behavior. Testosterone has been associated with social dominance and success in competition, and may restrain interpersonal trust to ensure social scrutiny for status and economic concerns. Indeed, testosterone levels in humans correlate positively with financial gain on the stock market and, as such, appear predictive of economic shrewdness.

On the other hand, the researchers note, previous studies have shown that high levels of the female reproductive hormone oxytocin tend to induce trust: “Following oxytocin administration, subjects continue to allocate substantial amounts of funds to untrustworthy others, despite being told that their opponents had repeatedly violated their trust.”

The problem with this kind of study, of course, is that it falls into the correlation-equals-causality fallacy: It declines to examine the social reasons for its subjects’ supposed naiveté and leaves the impression that social and economic achievement is biologically determined. The study relies on the a priori assumption that purported “masculine” traits and behaviors–financial acumen, shrewdness, ability to compete for scarce resources–are and should be valued over “feminine” qualities–emotional openness, naiveté, vulnerability–which are pathologized by the study.

In her 1995 book Im/partial Science, feminist scholar and microbiologist Bonnie Spanier shed light on the ways in which gender stereotypes influence science. Of the sexualized sperm, which was conflated with “masculine” qualities like aggression and activity, she wrote:

Superimposing stereotypes of the active male and the passive female distort our understanding of the process of fertilization … [The] imposition of such ideology, unintentional though it may be, simply takes culturally pervasive but highly questionable beliefs in inherent differences between men and women and embeds them at the molecular and cellular levels of our knowledge about ‘nature.’ In doing so, the power of science in general … reinforces sexist biological determinist beliefs, despite any good intentions the scientists may have.

Science that claims a complete understanding of human behavior is limiting because it can function to reproduce gender biases while claiming ideological neutrality. So maybe it’s time to think beyond the savvy testicles and consider other possible reasons why oxycotin-ridden women are soft and loving, or why those “go-getter” men tend to dominate Wall Street.