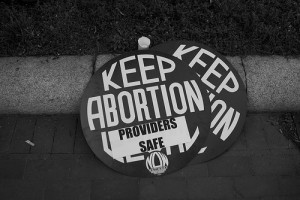 This Monday, May 31st, marks the one-year anniversary of the murder of esteemed abortion provider Dr. George Tiller. On Thursday, May 27th, Senate Majority Leader Harry Reid (D-Nev.) made a strong statement on the Senate floor about this “indefensible crime”; in it, he mentions knowing the niece of Dr. Barnett Slepian, another murdered abortion physician. That niece, Amanda Robb, authored the current Ms. magazine article about Tiller’s convicted murderer, Scott Roeder, and his connections with other anti-abortion extremists.
Here are the words Sen. Reid delivered:
A community in Kansas still shakes one year after the brazen murder of one of its own. This weekend will mark the first anniversary of Dr. George Tiller’s death.  He was gunned down in front of his Wichita church the day before last Memorial Day.
Dr. Tiller was killed at point-blank range, at his place of worship, in the middle of a Sunday morning, while his wife sang in the church choir just yards away.
He was murdered by an unrepentant assassin who took a life in the name of protecting life. It was an indefensible crime and an incomprehensible excuse.
Just as despicable as Dr. Tiller’s death was the fact that his murder wasn’t an isolated incident. It wasn’t even the first time someone tried to kill him. His clinic was bombed in 1985. He was shot twice in 1993. And over the next 16 years, seven clinic workers would be killed before Dr. Tiller would become the eighth.  More than 6,000 other acts of violence have been launched at clinics and their workers–bombings, arsons, assaults and other attacks.
The last doctor killed before Dr. Tiller was a husband and father from Buffalo named Barnett Slepian. He was an OB/GYN who also helped poor women access safe, legal abortions. Because of that, he was murdered in his home. I didn’t know Dr. Slepian, but I knew his niece. She came from Reno, Nevada, and she once worked in my office.
The tragedy of Dr. Tiller’s death, and of Dr. Slepian’s death–and of every atrocity like it–is independent of the issue of abortion. It’s not about the legality of abortion or funding of abortion. These are emotional debates, and ones on which people of good faith can disagree.
What so shook that Kansas town was rather an act of terrorism. What reverberated out to our borders and coasts from the center of our country was the violation of our founding principle: that we are a nation of laws, not of men.
Everyone in America has the right to disagree with its laws. Everyone has the right to dispute and protest its laws. But no American has the right to disobey them.
Not all of us would choose Dr. Tiller’s profession.  Not all of us would seek his services or agree with his philosophy.  But it is the responsibility of every American to respect another’s right to practice his profession legally.
Those who believe in the sanctity of life cannot be selective.  We must value every life–not just those with which we agree.
Photo taken at vigil for Dr. George Tiller, June 1, 2009. From Creative Commons, Attribution-Share Alike 2.0 Generic
Email
Share
Tweet
Pin
Share
Flip
Tagged: Anti-Abortion Extremism, Reproductive Justice
Email
Share
Tweet
Pin
Share
Flip