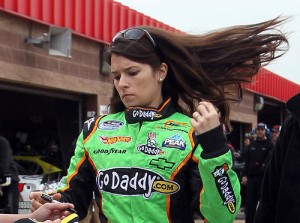 Auto racing is one of the few international sports where both men and women compete on the same field. This Sunday, the Indianapolis 500, one of the highest profile races in the world, will feature more women than ever before:  Danica Patrick, Sarah Fisher, Ana Beatriz and Simona De Silvestro. Patrick came in 3rd place last year–could she take the checkered flag this time?

It has been 33 years since  Janet Guthrie was the first woman to be allowed to compete in the Indy 500, and things have changed considerably since then. As Guthrie recounts in her biography, a few years before she raced in Indianapolis even the press box had been off- limits to women, let alone the garage or pit area.  A woman could be a photographer, a reporter or even own the race car but couldn’t get anywhere near it during the race. Most established drivers believed that women were too weak to handle a 750-horsepower, 200-mph championship race car, saying, “Women don’t have the strength, women don’t have the endurance, women don’t have the emotional stability and women are going to endanger our lives”

While the qualification of this year’s contingent of women Indy drivers demonstrates how many of these misperceptions and challenges have been overcome, women drivers still have to put up with plenty of sexism.  In 2005, when Danica Patrick won Rookie of the Year at the Indianapolis 500, the head of Formula One racing, Bernie Ecclestone, commented after the race–and later repeated to Patrick herself–“Women should all dress in white like other domestic appliances.”

During qualifying rounds this year, Patrick has already faced criticism at an outburst in which she blamed her team for her car’s lacking performance.  Surprisingly, her comments were broadcast over the track’s PA system. after which she was booed by some fans. (Feminists might also question how Patrick has marketed herself as much on her sex appeal as on her driving skill over the past five years.)

Women race car drivers face an overwhelmingly male fan base and working environment. The machismo that defines the public image of motorsports makes certain fans unwilling to recognize that racing that women can be endowed with the same mental and physical prowess as the men they compete against. Insistent on viewing women race car drivers as sexy diversions–a position not helped when the drivers themselves play into that stereotype, albeit in order to earn hard-to-come-by sponsorships–such fans are likely to continue to minimize their successes.

But as the numbers of women competing in the Indy 500 continue to rise, and the women drivers’ results improve, it will be harder to discount them as athletes. The four pioneering women competing in the race this Sunday not only shatter myths about their ability to compete equally against men, but also prove once again how many arenas thought to be exclusive to men were the product of male insecurities rather than female inadequacies.

UPDATE: Danica Patrick finished an impressive sixth in the Indy 500; following her in the standings were Simona De Silvestro at 13th, Ana Beatriz at 21st and Sarah Fisher at 26th. You go, girls!!!