UPDATED: When we heard that Elton John played at Rush Limbaugh’s recent fourth wedding, it took us a few minutes to get our jaws back up.

If you’ve forgotten how charmingly hateful Limbaugh can be, GLAAD has a rundown of derogatory statements Limbaugh made about Rep. Barney Frank (D-MA) and Rachel Maddow.

John gave a private concert for Rush, 59, and bride Kathryn Rogers, 33, which went “into the wee hours” at the June 5th reception. Karl Rove and Sean Hannity were among the esteemed guests.

What’s next, Ann Coulter becoming BFF with Ellen Degeneres? How does one of the most famous gay entertainers in the world agree to play at the private wedding of one of America’s biggest conservative pundits?

So we dipped the Rocket Man into our highly scientific* Feminist Litmus Test. 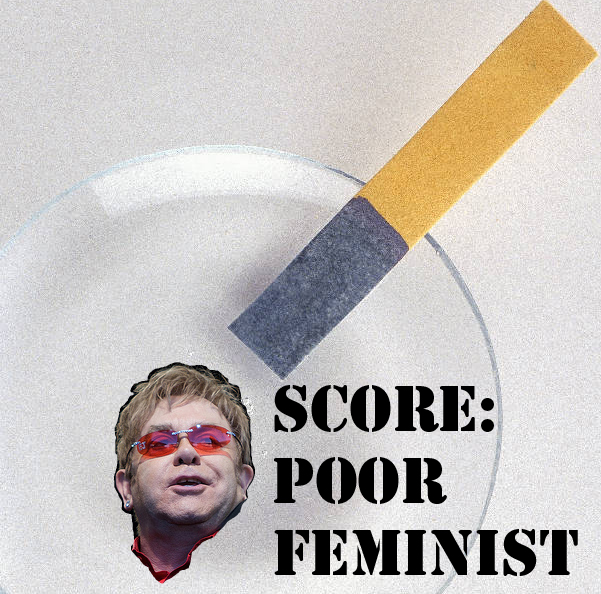 We feminists are an inclusive bunch, but hanging out with a noted anti-choice conservative sends the message that you care more about cash than human rights.

You might think Sir Elton would find it ironic to play at a ceremony he, as a gay man, cannot legally have. But it probably didn’t bother him at all. John, who has been in a civil union since 2005 with his longtime partner David Furnish, has said he doesn’t think gay marriage should necessarily be legal.

On the other hand, what does this say about Rush Limbaugh? Zev Chafetsof The Wall Street Journal explained what he thought Limbaugh’s reasoning was and his case is pretty rational:

What did? Well, if you are El Rushbo and you’re holding a big wedding, you don’t hire the local wedding band. And if your bride is 26 years younger, you want entertainment with a multi-generational appeal.

Then, of course, there’s the money. John’s wedding-singer fee was reportedly $1 million. That’s a lot for most of us, but chump change for a man already worth about $500 million.

But maybe the money didn’t go right into Elton’s fur-lined pockets. He has been very charitable to AIDS causes and even to the Women’s Sports Foundation, started by his buddy Billie Jean King. If some of that money earned for serenading hate-spewing Rush Limbaugh can be used to do good, well, maybe you’ll come out of the Feminist Litmus Test a little better, Elton.

One commenter on People’s site responded, “Limbaugh is not interested in building bridges, only in character assination and blowing up bridges of respect and understanding.” We concur.

*By which we really mean not scientific whatsoever.