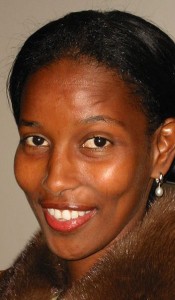 Ayaan Hirsi Ali, the Somali-born former Dutch parliamentarian and fellow at the American Enterprise Institute is clear about one thing: There is no hope for Muslim women who do not renounce their faith.  According to Hirsi Ali, Muslim women–constricted by Islam–cannot be feminists, live independently, enjoy their sexuality or escape the mental shackles that bind their intellect. She elucidates on this theme in her latest book, Nomad: From Islam to America, through letters written to family members with whom she has been estranged, owing to her own renunciation and public criticism of Islam.

In recent years, Hirsi Ali has been a huge success with the European right. An immigrant espousing anti-immigrant sentiments, willing and vocal in her criticism of the Muslim minority in the Netherlands, Hirsi Ali was quickly adopted as a political asset by Dutch conservative parties who could use her public disavowal of religious and cultural identity as a legitimate attack on multiculturalism. All this ended abruptly when she was divested of her Dutch citizenship after it was proven that she lied on her asylum application.

So now, Ali is in America and finds herself in a political conundrum. She is a feminist (as announced by the title of a recent piece run by The New York Times Magazine) but she is at a conservative collective, The American Enterprise Institute, which rarely, if ever, supports feminist concerns. The result resonates with the kind of opportunism seen too often at political think tanks. Hirsi Ali no longer simply suggests that Muslim women renounce their faith completely, but rather that they should look to Christianity instead of Islam for a religious identity. This is because Christianity, unlike Islam, has a “reform” branch that would allow them to ask questions. Unlike earlier writings, in which Hirsi Ali seemed to renounce all faith as a stricture on women’s self-realization, the political environs of the American Enterprise Institute seem to have softened her stance toward at least one faith.

But while she may be in the U.S. (and now a favorite of certain U.S. conservatives), Hirsi Ali remains distant and seemingly uninterested in the efforts of Muslim-American women to redefine their faith. Her book, while poignantly capturing the weight of structural inequalities crippling Muslim women from Somalia to Pakistan, refuses to take seriously the efforts of Western Muslim women who are refusing to let mullahs define Islam. One example of this is the “Pray In movement” launched last year through which groups of Muslim American women have insisted on praying front and center in mosques in non-violent protest against gender segregation. Similarly,this past Friday, June 11th, a Muslim Canadian woman named Raheel Raza led a mixed congregation of men and women at Oxford University in England, going against the stricture that says only men can lead communal prayers. In another reform effort, Laleh Bakhtiar, a scholar at the University of Chicago, has translated the Quran and challenged earlier translations of verses that supposedly allowed for men to “discipline” their wives. The work of all these women, and scores of others in Muslim countries, show the transformation of religious tradition instead of the handing off the task of defining faith to mullahs and religious clerics.

Hirsi Ali’s personal story is undoubtedly compelling. What is surprising is her refusal to recognize the subjective dimensions of spiritual belief and appreciate a concept of freedom that allows women to define their own paths to empowerment, even if they are different from her own. In remaining wedded to the binary that sees only renunciation of Islam as a true choice, Hirsi Ali fails to ask the more crucial questions posed by her own  biography. What can be done to save lives of women destroyed by patriarchal interpretations of Islam while reform is still a work in progress? Can these women, in Somalia and Pakistan, Egypt and Libya  find hope for the future in the  possibility of change even as their present is sacrificed to its slow pace? It is these question, rather than trite prescriptions that argue for superiority of one faith over another, that deserve the attention of feminists around the world.