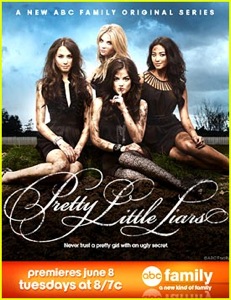 In need of summer TV,I decided to test out the new ABC Family show Pretty Little Liars. Hey, it’s been a Twitter trending topic for the last day. It must be worth watching, right?

The Tuesday-night show is based on a series of books by Sara Shepard. It centers on a group of four very popular high school girls in the wealthy white town of Rosewood. They spend their time shopping, gossiping, sneaking shots of alcohol and treating less popular girls poorly–normal “girl” activities.

Their clique disbands, however, when one of the girls goes missing. A year later, the four remaining girls rekindle their friendship when they begin receiving mysterious texts and emails threatening to make public their deepest secrets from, it seems, their missing friend. Except her body has just been found.

The tag line for the show is, “Never trust a pretty girl with an ugly secret”– which begs the immediate question: Are ugly girls equipped to handle ugly secrets, or are they equally untrustworthy, or are they so invisible nobody at ABC Family knows?

After surviving the first two episodes, I can say that only morbid curiosity kept me watching, because Pretty Little Liars is as harmfully sexist as its tag line. The take-away message seems to be that pretty girls shouldn’t worry themselves with issues bigger than their purses, else there will be consequences. The “pretty girls are stupid” myth is prevalent throughout, along with some other decidedly anti-woman content.  Here are the Top Five Anti-Women Myths espoused by Pretty Little Liars.

1. A woman’s primary source of power lies between her legs; sex is a commodity.

The mother of one of the girls (Hanna) promises sex to a cop so her daughter won’t be prosecuted for shoplifting tarnish their reputations (“In a small town like this, what people think about you matters… I buy you everything you need to be popular.”) After delivering on her end, the cop sticks around without, it seems, Mom’s consent. For this show, the price of a misdemeanor is the loss of consent and autonomy.

2. Women are vapid, emotional creatures who can’t be trusted, young women even more so.

Aria, the show’s central character, has been harboring her father’s secret: He had an affair. When her mom demands an explanation for her and her father’s strained relationship, her father’s response is,

She’s a teenaged girl… they’re all moody and unpredictable.

Emily is questioning her sexuality. Her plight has the potential to be impactful, but the show employs a male-gaze-centric ‘girl-on-girl’ vibe. Emily will do anything–even engage in excessive PDA with her boyfriend when she’s uncomfortable with it–to not challenge the status quo. We are led to believe that Emily is either a lesbian or simply confused; the show does not (as of yet) give space to a narrative of bisexuality.

4. Bad girls should be punished.

Ali, the ultimate bad girl, the Queen Bee of the school and of her clique, is dead–the ultimate punishment. The other girls are now haunted for their secrets, all of which involve their own mistakes.

5.  A woman’s worth is the sum total of her appearance, social status and man on whose arm she hangs.

The opening credits are a montage of lip gloss, nail polish, eye makeup, hair curls and high heels. The show seems to almost be fearful of a loss of traditional femininity in our society, and it compensates by relegating all the characters to hyper-feminine roles.

Looks like I’m back to searching for a new summer show. Any suggestions?

What do you think of ABC Family’s “Pretty Little Liars?” Can you find additional anti-women stereotypes? Leave them in the comments below!

Cyndi teaches English overseas and blogs her misadventures as the "Feminist-san." She's a former Ms. editorial intern and is published in Ms. magazine, the Daily Nebraskan and L Magazine. Her work has been featured on mtvU.com and picked up by CBSnews.com. She is the first-place recipient of the 2007 National Society of Newspaper Columnists annual collegiate columnist competition.