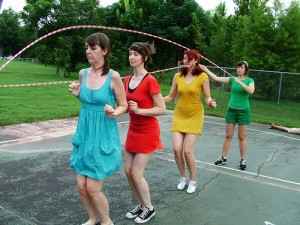 This Saturday, the Girls Educational Mentoring Service (GEMS) will host New York’s 5th annual End Commercial Sexual Exploitation of Children (CSEC) Day in Central Park. From 12 p.m. to 4 p.m., this event will celebrate the strength and leadership of youth survivors of domestic sex trafficking, while spreading awareness about the ongoing tragedy, which our nation has a habit of neglecting. (The Department of State just published its first global trafficking report to include data on the United States.) GEMS community outreach explained how activities like double dutch will them accomplish their goals this weekend:

Founded by Rachel Lloyd in 1999, GEMS is the only organization in New York City to provide services to domestically trafficked and sexually exploited girls. Trafficked as a teen herself, Lloyd aims to provide victims with relatable mentors in a healing environment. Working with young women ages 12 to 21, GEMS is the largest group of this kind in the nation.

End CSEC Day began in 2005, advocating the passage of the Safe Harbor for Exploited Children Act, legislation that promised victims under the age of 16 comprehensive services rather than prosecution and incarceration. While the federal government supports safe harbors in theory, their actual practices leave much to be desired. Many states ignore their own consent laws and charge minors with prostitution, contradicting the Trafficking in Victims Protection Act of 2000. You can read more coverage in the next issue of Ms.!

Photo from Flickr user Glamour Schatz under Creative Commons 3.O. (Subjects of photo are not affiliated with GEMS or End CSEC Day).