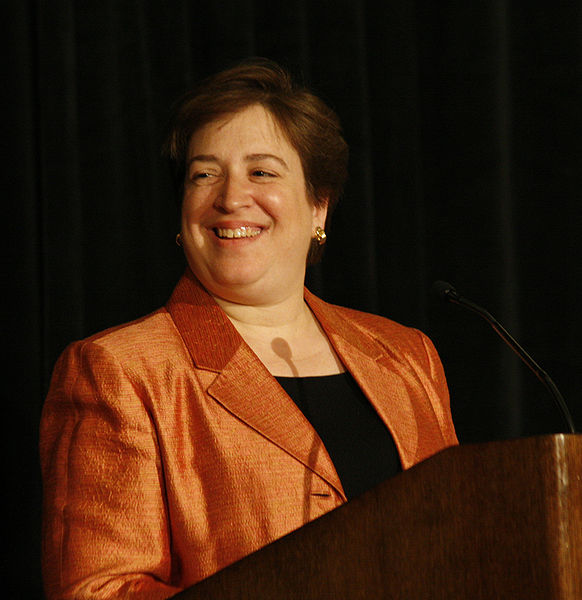 The disinformation about Supreme Court nominee Elena Kagan began immediately after her nomination, particularly over her record on Second Amendment Issues and abortion and her role in Harvard’s removal of ROTC. It’s apparent that Senator Jeff Sessions (R-AL), ranking member of the Senate Judiciary Committee, has no desire to clarify the truth during Kagan’s confirmation hearings, which began today. The list of minority witnesses Sessions has called to testify against Kagan is, well, startling: It includes a law professor who advised on Bush-era interrogation techniques, three people with ties to the anti-gay and anti-choice Family Research Council and former military members who are now heads of Astroturf groups.

Appearing Sunday on Face the Nation, Sessions would not rule out a filibuster “if things come out to indicate she’s so far outside the mainstream.” But if Sessions has indicated that Kagan’s hearing could get ugly, it’s because of the ugly cast of characters he has assembled–not because Kagan’s record, though rather thin, isn’t clear. I’ve broken down the biographies of each of the minority witnesses and put them into handy categories for Ms. readers.

Category 1:  What Would the Founding Fathers Do? (The Framers’ Intent):

Ronald Rotunda: A lover of bowties, Rotunda is currently a law professor at Chapman University. From 2004 to 2005, he advised the Department of Defense’s General Counsel. That general counsel, William J. Haynes II, is under indictment in Spain for international war crimes. Haynes was part of the “Bush Six” and had a central role in developing the use of “extended interrogation techniques.” (Rotunda’s involvement in the infamous torture memos, much discussed in the blogosphere, isn’t totally clear.) Rotunda, a former fellow at the conservative Cato Institute, casts himself as a neutral legal ethicist. Seriously.

David A. Norcross: Chairman of the Board of Governors of the Republican National Lawyers Association, Norcross was criticized for being a key player in the 2004 Bush-Cheney campaign while simultaneously lobbying the Department of Defense, Department of Transportation, Senate and House for the military contractor Raytheon.  He’s a member of the conservative Federalist Society, the legal group that wages war against “liberal ideology, which advocates a centralized and uniform society.” Expect Norcross to testify against “judicial activism.”

In a similar vein, Robert Alt, Stephen Presser and Ed Whelan have also been called by Sessions. Each has written papers calling for judicial restraint and literalist interpretations of the constitution.  After Kagan’s nomination, Whelan criticized the President for “picking a justice who would both rubber-stamp his massive effort to transform the relationship between the government and the American people and continue the liberal judicial … project of inventing constitutional rights.”

Category 2: Kagan’s “Not Sympathetic” to My Guns (Second Amendment):

Dave Kopel: Kopel is probably the most interesting choice: He’s currently the research director of the libertarian Independence Institute and a frequent contributor to the Volokh Conspiracy legal blog. A registered Democrat, he voted for Ralph Nader. Like many libertarians, he’s a vocal defender of the right to bear arms and is sure to take Kagan to task for the memos she wrote while clerking for Justice Thurgood Marshall.

William J. Olson: Olson’s self-named law firm recently filed an amicus brief for Gun Owners Foundation, Gun Owners of America, Inc. and Virginia Citizens Defense League in a lawsuit against Attorney General Eric Holder [PDF]. The case is essentially Montana gun advocates’ attempt to circumvent federal gun restrictions by arguing that Washington can’t regulate firearms made and retained in-state–basically an attempt to get around waiting periods and registration (and the cause de jour of gun-lovers). Expect Olson to be a crazier Kopel.

Charmaine Yoest—President of the anti-choice group Americans United for Life, Yoest advised Mike Huckabee in his 2008 presidential run and served as vice president at the Family Research Council. During Sonia Sotomayor’s confirmation hearings, she wrote that President Obama’s standard of empathy infringed on the objective “facts” that, if considered, would lead to a Supreme Court reversal of Roe vs. Wade. Yoest wrote:

Since the Supreme Court took the right to regulate abortion away from Americans, more facts about fetal development have come to light. We now know, for example, how early the heartbeat and brainwaves begin. Can [Sotomayor] evaluate the changing landscape related to abortion with an open mind, and a philosophy grounded in the laws of our country?

Yoest later testified as a minority witness at Sotomayor’s confirmation hearing, you can read the entirety of her testimony here [PDF]. Expect more of the same during Kagan’s hearings. On May 10, Yoeste issued a press release that stated:

Americans United for Life will oppose President Obama’s attempt to reshape the Court as an activist pro-abortion institution through which unelected judges will work to impose an out-of-the-mainstream social agenda upon the American people.

Tony Perkins: Perkins is the president of the Family Research Council, the right-wing Christian group that has made the LGBT community one of its primary targets. In early June, Perkins penned an op-ed for CNN in which he argued that ending DADT will undermine religious liberty. On its website, the FRC maintains that homosexuals in the military are already responsible for numerous sexual assaults (about 8 percent). The “report” concludes:

Allowing open homosexuality in the military would do nothing to enhance readiness or effectiveness of our armed forces.  On the contrary, it would clearly damage them–in part because it would increase the already serious problem of homosexual assault in the military (FRC’s italics)

As ridiculous as the FRC’s claims seem, they were reported by CNN with little question.  Not surprisingly, FRC’s report was plagued by statistical problems.

Category 5: Kagan is UnAmerican (Banning the Military from Harvard):

Pete Hegseth: The founder and president of Vets for Freedom, Hegseth has publicly criticized Obama’s commitment to withdraw troops from Iraq by 2011—suggesting that Obama’s approach is downright feminine. This should come as no surprise since Hegseth was a Witherspoon Fellow at Princeton University–and those fellowships are endowed by Perkins’s Family Research Council. While a student, Hegseth founded a school paper in which he advocated a “return of the acceptability of the ‘homemaker’ vocation.” He’s big on stereotyping feminists, calling NOW a “radical, leftist, feminist organization.” Here’s guessing that Hegseth manages to paint Kagan as anti-American and a feminist (gasp!) in the same breath.

Thomas N. Moe: Moe campaigned for John McCain, spoke out against extending GI benefits and told an audience that Obama was a “demagogue” who would bring about a holocaust as president. Expect Moe to criticize Kagan’s patriotism. Like Hegseth and Youngblood, he will perpetuate the lie that Kagan threw ROTC off Harvard’s campus; in fact, Kagan never threw ROTC off Harvard’s campus and never barred military recruiter’s access to students.

Flagg Youngblood: Currently working for the conservative Young America’s foundation, Youngblood has made the Fox News rounds complaining about the hardship he faced as a ROTC member while at Yale University. Said hardship involved a 90-minute drive to and from ROTC training at another Connecticut college. What he won’t say: Yale provided free transportation to and from his drill, and his ROTC scholarship paid for a very expensive education. In a hyperbolic op-ed for the Washington Times, he called Kagan an “anti-military zealot.” In response, three Harvard law students (and Iraq veterans) wrote to the editors and praised Kagan as “highly supportive of students who have served in the military.”

Written with the help of Adam Weinstein.