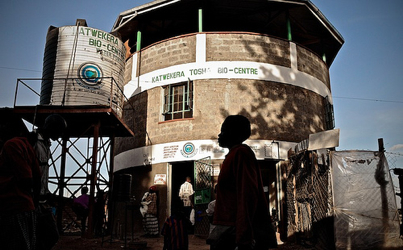 ENGLAND: The Church of England has appointed Dr Jeffrey John, an openly gay clergymember, as Bishop of Southwark. Supporters maintain that John is the right man to lead the liberal diocese, but conservative Anglicans warn that the appointment could split the Church–again.

KENYA: Amnesty International reports that women and girls in Kenyan slums, bereft of private bathrooms, avoid the communal toilets at night for fear of rape. Instead, the women use self-designed ‘flying toilets’–bags of waste that they then fling outside–an unsanitary solution that puts them at risk for diseases such as dysentery and cholera. The report suggests that increased policing of slums and informal settlements could improve the problem, as would the approval of a proposed biodegradable toilet bag.

JAPAN: As Sunday’s upper house elections approach, the Democratic and Conservative parties have split over a progressive proposal that would allow married couples to keep separate surnames. Currently, one spouse (usually the woman) must take the other’s name after marriage, making Japan the only Group of Eight nation with such a mandate. The system often “one-sidedly imposes burdens on women, inconveniences their social activities or causes the loss of their identity,” said Justice Minister Keiko Chiba. Nonetheless, the bill’s passage looks unlikely.

SOUTH AFRICA: Fikile Mazambani, a blogger for Black Looks, a blog by African writers and activists covering issues such as sexual orientation, gender based violence and popular culture, has reviewed Zanele Muholi‘s second installation, Faces and Phases, on exhibit until July 24th at the Michael Stevenson gallery in Cape Town. A visual activist, Muholi uses black and white portraits to document the lives of black lesbians in a society where hate crimes and homophobia are still common.

SWEDEN: The Feminist Initiative party has publicly burned 100,000 Swedish kronor (equivalent to $13,000 dollars) to protest unequal pay. The money, donated by an advertising agency, represents the disparity between the amount of money Swedish men and Swedish women make every minute. “It may seem desperate to burn 100,000 kronor,” said party Leader Gudrun Schyman, “but the situation is desperate as well.” The party hopes to win its first Parliamentary seat in September.

ABOVE: Photo of a center offering public pay-toilets and hot showers in Kibera from Flickr user newbeatphoto. Under CC 2.0