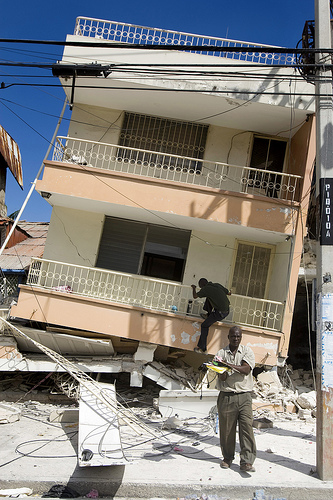 The earthquake that decimated various parts of Haiti six months ago actually has an affectionate nickname: Goudougoudou. Everyone uses the term. There are several jokes, from mild to spicy, about what to do in the event of another Goudougoudou, especially while one is engaged in any kind of private activity, from using the toilet to making love. Whatever you are doing, stop and make a run for it to the clear.

An onomatopoeia, Goudougoudou mimicks the sound that the buildings made when the earth shook everything on its surface and leveled those that were not earthquake-ready. Indeed, the word Goudougoudou doesn’t sound nearly as terrifying as the experiences that most folks will recount when you ask them where they were that afternoon when it happened.

Sandra, would not tell me her story at first. I heard it in detail from her mother Marie, whose voice rose several decibels when she recalled her horror:

Sandra was alone in the city.  She went there to register for a course.  She had just left the school building and crossed the street to take a tap-tap. She saw it collapse with everyone still in it.

On the bus ride home, Sandra grew hysterical. A woman on the bus finally threw a piece of cloth over her eyes so she would not witness any more. Buildings were still crumbling, crushing bodies.

When Sandra finally spoke to me, it was an abbreviated version. She focused more on a former classmate who had been buried under the rubble for several days. Since then, she has not been the same. When you look at her, Sandra says, it’s like looking at someone who is no longer there.

Maggie could not wait to tell her story. She was in the city with her niece. They both fell down when Goudougoudou struck. With her wiry frame, Maggie used every part of her body to recreate the moment. She said, “I didn’t know what was happening. The thing dropped me on the ground, pow! flat on my belly. I tried to stand. It dropped me down again, and pow!”

How to deal with the trauma of these women and so many others remains a debated issue:

With the Haitian government still unable to coordinate assistance, basic needs (including mental health) are mainly addressed by foreign relief organizations and missionary groups. And while disaster-trained counselors seek to help those suffering from post-traumatic stress disorder, Haitian psychologists are weary of standard PTSD treatments unless they are culturally sensitive. They are urging psychological volunteers to do their homework, ensuring that the help given to quake survivors is effective and sustainable.

And then maybe they’ll be better prepared for the continuing aftermath of Goudougoudou.