Haiti's Women 6 Months Later: Getting Back to Work - Ms. Magazine
Skip to content 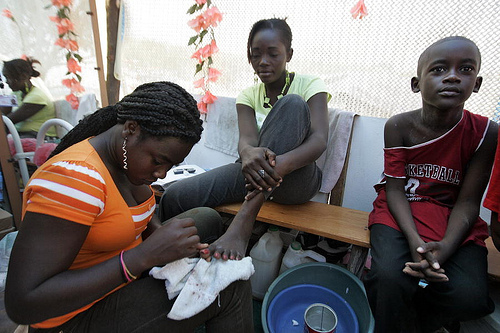 Nearly six months after the earthquake in Haiti, those of us involved in the UN humanitarian response are still struggling to provide those who have survived sexual violence with access to services they need–not an easy task, since there wasn’t much in the way of services for them to begin with. At the same time, we have tried to help prevent sexual violence, and one of the best ways has been by strengthening the resilience of families and communities through economic empowerment programs. Women have already started creating informal markets in many of the temporary settlement camps, and this is a good barometer for how safe they are feeling and how they are trying to return to “normal.” But there has to be more support for Haitian women who want to work.

That’s where the Center for the Promotion of Women Workers (CPFO) steps in. CPFO works with women factory workers to provide educational activities that enable them to deal with gender issues, working conditions and health care, and to share their experiences and concerns with other women. Active since 1985, the organization has created a community for women who would otherwise be vulnerable to poor conditions, health risks and other concerns. In addition, women workers are able to access civic education and legal assistance programs as well as reproductive health services.

The civic education and legal support component fights discrimination and increases women’s literacy in civil law, labor rights and women’s rights. Their bulletin, “Jounal Fanm Ouvriyèz” (Journal of Women Workers) offers women a space for expression and is widely distributed within the working population, women’s organizations and other health and legal institutions. The reproductive health component offers training in women’s health and family planning and prevention of HIV/AIDS–a serious problem here in Haiti.

Gladys Casimir is one of CPFO’s lead trainers. “I do this for women to be better armed to participate in this fight–the fight for an effective women’s space in public policy,” she says. Casimir conducted a survey in the mid-1980s to determine working women’s status and working conditions in Haiti and was shocked by what she found. But rather than despair she saw an opportunity to “improve living conditions and employment of women workers in assembly industries, and participate fully in the creation of new gender-equal social dynamics.” Her strongest tool is the law–she wants to see implementation of constitutional laws that promote women’s rights and ensure that these are in line with international conventions such as the Convention on the Elimination of All Forms of Discrimination Against Women (CEDAW). She also wants to see abortion decriminalized and paternal responsibility engraved in the law. And she works with other women’s organizations in Haiti to ensure that perpetrators of gender-based violence are penalized–“a 10-year minimum,” she says. As Gladys tells it:

The future of Haitian women is closely linked to the fate of the country. It is imperative that women participate in an active way in the reconstruction of the country, not as spectators but as actors. If we can get more women in leadership and decision-making, this can be a reality.

Above: Haitian woman works at nail salon set up in settlement camp, from Flickr user United Nations under Creative Commons 3.0.