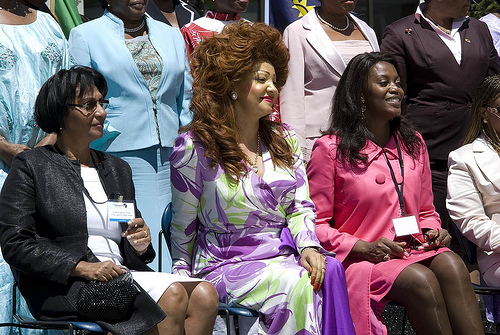 When 14 African first ladies traveled to Los Angeles last year for the first African First Ladies Health Summit, it looked like great things were afoot. In the course of their two-day conference, these feisty women helped raise awareness of the horrific maternal death rates in their countries and on how they’re interlinked with larger issues of women’s health, girls’ education and women’s empowerment.

The First Ladies are uniquely situated to really make a difference in countries where birth control is inaccessible, where women live a six-hour bicycle ride away from the nearest midwife and where medical facilities are lacking beds and supplies. These women are looked up to and have access to policy makers. And they’re seen, almost literally as the mothers of their nations, not just as tools for their husbands’ political agendas. What better people, then, to help make a significant change in African national policies, especially in the area of women’s health?

But it’s not quite so easy. As Cora Neumann of the RAND African First Ladies Initiative points out, the first ladies returned from the Health Summit to Africa only to find “no office to speak of, no infrastructure, no set group of advisors.” Even the most vocal and empowered came back not to systems of support and advice, as would be the case in most developed countries, but to an almost complete lack of aid.

And that’s where the African First Ladies Initiative is stepping in. The summit was only the beginning: The new program will take the African first ladies from conference to conference in the U.S. and Africa, beginning with a launch at the Clinton Global Initiative in New York and a fellowship series in Washington, D.C. The two-year program is set to provide the first ladies and their advisors with support for policy-making, program development and targeted advocacy. It will also set standards for how a first lady’s office should be set up and run. The aim is initially to make strides in maternal health, girls’ education and women’s empowerment, and eventually to develop a first ladies’ network that spans the globe.

I’m impressed by the whole thing, although I must say that the term ‘First Ladies Initiative’ initially jarred my feminist sensibilities. Are women destined to forever take a second seat to male leaders? Certainly not: I’m told that the term is designed to point towards a strongly increasing influence of “first” leaders on national policies–eventually leading to co-leadership and complete gender equality in governments. Sounds great to me. So here’s to the African First Ladies Initiative, and to everyone who provides them support. You go, First Ladies!

Above image of First Ladies of Cape Verde, Cameroon and Angola (from left) by Sarah McGowan for The WIP.