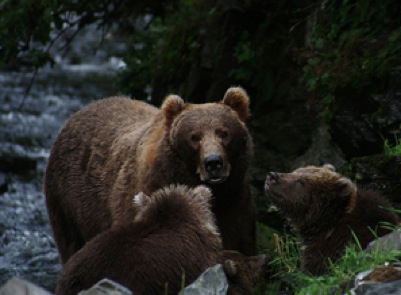 During the 2008 Presidential campaign John McCain railed against “frivolous” government spending. In one television ad a voiceover announcer says “233 million for a bridge to nowhere. Outrageous… Three million to study the DNA of bears in Montana. Unbelievable…” We now know that McCain’s running mate, Sarah Palin, had a questionable relationship to that confounded bridge, but who could have predicted that she would also have a vexed connection with those bears?

As it turns out, the money McCain was incredulous about was earmarked to help Mama Grizzlies. That’s right, the money was being used to collect DNA samples in non-invasive ways from grizzly bears to monitor their populations. Since 1975, grizzly bears have been on the Endangered Species list. Some conservation biologists think the current population is less than 10 percent of what it once was. Estimating how many bears exist in their natural habitats is crucial in order to make plans to keep the grizzlies from going the way of the baiji (the Chinese River Dolphin that has been functionally extinct since 2006).

The traditional method for monitoring grizzly populations involves capturing and collaring female bears, because monitoring them best tracks population trends. This method is dangerous, difficult and expensive, though. So the money that candidate McCain objected to was actually better spent, and better for the well-being of mama grizzlies and their cubs. Grizzly bears reproduce slowly. A mama usually gives birth to between one and four cubs and the cubs then stay with her  for up to four years. Live capture can separate mamas from their young, and when that happens the cubs die. The non-invasive DNA hair-capture method avoids that risk and provides scientists with important data that can help them protect the remaining grizzlies.

What would Sarah Palin have said about the money that her running mate objected to spending to help Mama Grizzlies? Given that she was opposed to putting Mama Polar Bears on the Endangered Species list (despite her protests, polar bears were listed as threatened in May 2008) and claims to be a fiscal conservative, one can imagine that she, too, would object to this sort of expenditure. Palin’s rhetoric for protecting America is ferocious, but she has a lousy record of protecting iconic American wildlife and their habitat. We shouldn’t be surprised that she has found a new way to exploit the real, endangered Mama Grizzlies.

Lori Gruen is Associate Professor of Philosophy and Feminist, Gender, and Sexuality Studies at Wesleyan University where she directs the Ethics in Society Project and serves on the governing board of the College of the Environment. She has published extensively on topics in ecofeminist ethics and epistemology, environmental justice, and feminist analyses of human relations to non-human animals. She has just completed a book, Ethics and Animals: An Introduction (Cambridge, 2011) is the co-editor of three others, and is now working on a manuscript exploring the complex philosophical issues raised by our relations to captive chimpanzees.