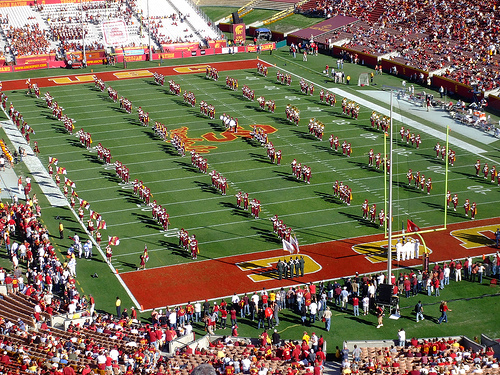 If you’re a regular reader of the Ms. Blog, you’ll know that we’ve given one quarterback, Ben Roethlisberger, a much-deserved hard time for his alleged off-the-field sexual assaults of women. But now it’s time to applaud another quarterback—or, at least, a former one. Pat Haden, who was just named athletics director of USC and was a star QB for the university in the 1970s (and later in the NFL), has won our hearts with his recent shout-outs to women’s sports. Said Haden after he accepted the job:

I have a real affinity for women’s athletics… I would like [USC to] have the best portfolio of women’s sports in the country.

USC is a school known for men’s football more than anything else except maybe its cinema school, which produced George Lucas. And it’s not that USC women athletes haven’t made quite a splash themselves—especially basketball stars such as Lisa Leslie, Cheryl Miller, Tina Thompson, Cynthia Cooper and the McGee twins. But for the new AD to trumpet women’s sports as he takes on the job of resurrecting the athletic department from its scandal-plagued recent past is as unexpected as it is delightful.

Haden even called the implementation of Title IX a “seminal moment” in the nation’s history, and pointed out how it has enabled women not just to play competitive sports in school but to use the experience to build careers and give back to society. As if to prove his point, the new president of USC who hired Haden, Max Nikias, also has increased the involvement of some former collegiate women athletes and a sports scholar in the athletics department. The faculty athletic representative will be law school professor Clare Pastore—who was captain of the field hockey team at Colgate University. Amy Chisholm of the Freeh Group—which has been hired to consult with the university on staying compliant with NCAA rules—was a member of the tennis team at Marshall University. And Ellen Ferris, who has been promoted to associate vice president for athletic compliance, got her master’s degree in sports science.

One thing I’m not surprised about when I read Pat Haden’s bio: The first two of his four children are daughters. How could he not have supported Title IX?

But Pat, much as we cheer your great start, we’re still going to hold your feet to the fire about Title IX compliance. USC currently has 306 female athletes and 363 male athletes—that means women are 46 percent of athletes, but they compose 51 percent of all students. Close, but those figures are boosted mightily by women’s rowing, which has 81 women participants. So how about adding, say, women’s softball to the USC athletics program? What sports do you think, dear readers, USC should add to bring up the numbers of women athletes to complete parity?

Above image of USC marching band on the football field at the Los Angeles Coliseum by Flickr user irrelephant under Creative Commons 2.0.