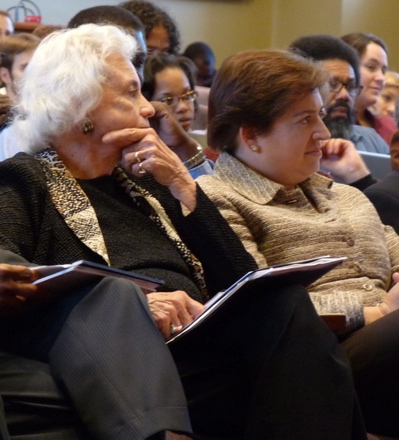 We’ve given considerable attention to the nomination of Solicitor General Elena Kagan to the U.S. Supreme Court, as we should. But we should also pay attention to conservative foot-dragging and downright obstructionism on President Obama’s nominations to the lower federal courts.

While it’s crucial to have good Supreme Court justices, it’s also essential to have good judges on the federal district and circuit courts, not only because these judges make many important decisions but also because they are the prime pool of candidates for nominations to higher-level courts. We’ve seen Kagan criticized for her lack of judicial experience. Only about 30 percent of judges on the lower federal courts are women [PDF], which means that there are comparatively fewer women than men with federal judicial experience. We need more women in the pipeline.

Despite opposition, Sonia Sotomayor won confirmation to the Supreme Court, and it looks hopeful for the Kagan nomination. But conservatives have been holding up many of Obama’s lower-court nominations. In 2009, Obama nominated 33 judges to district and circuit courts, while the Senate confirmed only 12. Republican opposition to Obama’s nominations has far exceeded Democratic opposition to Bush’s nominations in his first year. There are currently 98 vacancies, with 13 circuit-court and 33 district-court nominations pending, many of them for far too long.

Obama has also been slow in making these nominations: Bush made 89 judicial nominations by February after his first year in office, whereas Obama nominated only 42 judges during the same time period. However, he has significantly stepped up his nominations in the last several months: He’s now put forth 84 nominees, 37 of whom have been women.

So who is awaiting confirmation to the lower federal courts? One nominee, to the 7th Circuit Court of Appeals, is Victoria F. Nourse. When Obama nominated her on July 14, he noted that she has shown a commitment to justice throughout her career. Nourse is currently the Burrus-Bascom Professor of Law at the University of Wisconsin Law School, having also taught at the law schools of Emory, University of Maryland, Yale, New York University and Georgetown. Before entering academia, she was assistant counsel to the Senate committee investigating the Iran-Contra affair, and later senior counsel to the Senate Judiciary Committee under Joseph Biden, where she was involved in the writing and passage of the landmark Violence Against Women Act. She is well known for her work on gender and criminal law and has written on “honor” killings and forced sterilization. Her recent book, In Reckless Hands: Skinner v. Oklahoma and the Near-Triumph of American Eugenics, tells the fascinating story of how a group of imprisoned men in the 1940s challenged Oklahoma’s forced sterilization law and won before the Supreme Court. Sounds like a good feminist to have on a federal court!

We don’t hear much about lower-court nominations, but we should keep pressure on Obama to nominate great candidates, especially women, and demand that our senators approve such nominees.