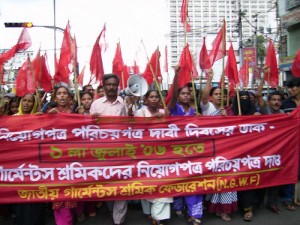 We may have applauded the Bangladeshi garment workers’ pay raise too soon. While an 80 percent increase may sound generous, the new wage of $45 a month is far below the minimum monthly living wage of $73, which has workers striking and protesting violently.

“We have tried our best to meet the demands of the workers,” said Labor Minister Khandaker Mosharaff Hossain, announcing the new wage.

“The government has just done what the garment factory owners want. This offer is not acceptable to workers,” said Mosherafa Mishu, the head of the Garment Workers Unity Forum. He warns that workers’ emotions are running high and they are prepared to organize a militant movement. With more than 4,000 factories employing 2-3 million workers, that kind of action could really shake up the nation.

This is the first raise since 2006. Only four years ago, workers were living on the equivalent of $25 a month, an income well below the poverty line. Labor rights group the International Trade Union Confederation has said garment workers in Bangladesh are paid the least in the world.

Meanwhile, business is booming for Bangladesh’s garment industry. Exporting mostly to Europe and the United States, with clients like Wal-Mart, The Gap, and Levi-Strauss, they earn $12 billion a year and generate 80 percent of the country’s export income.

The garment workers have at least one power player in their corner. A week ago, just before the final decision, Prime Minister Sheikh Hasina Wajed told parliament garment workers’ salaries were “inhuman,” and said manufacturers should share profits with the workers.