Why I Miss bell hooks - Ms. Magazine
Skip to content 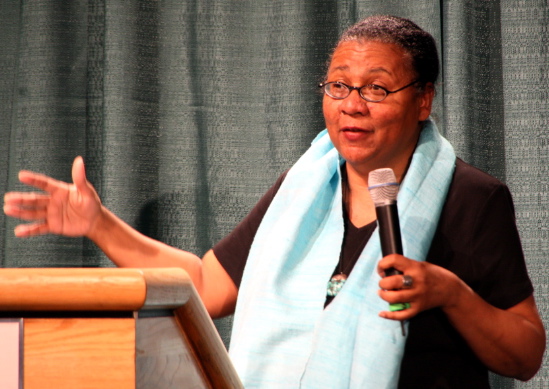 A month ago, when that white Seattle cop punched a black girl in the face over a jaywalking incident, I thought of bell hooks. When, with assistance from the Urban League, the girl apologized days later in order to get a reduced sentence and I waited for the public outrage that never came, I realized I really miss bell hooks.

To get a reality check, I talked to my girls. We agreed this situation was seriously messed up and, moreover, there wouldn’t be any Obama beer summit over this one.

I considered different angles on this moment. No doubt, this was about the intersections of race, class and gender. It was also a story about performances of civility and docility. About what is acceptable behavior for a young black woman confronting legitimized white power. But I just could not write it.

Lakia Brown at TheRoot.com came close to expressing my feelings when she wrote that the punch in the face felt like a kick in the gut. But writing about it required that I go to a place where black women know we dare not go publicly (though I tend to go there in my performance work). We dare not go there in mixed company, particularly among white folks with unexamined white privilege–who think that Obama’s presidency means we are all miraculously equal and now live in this purportedly post-racial society.

Each time I looked at the YouTube video of that incident I felt so sick I refused to share what went on in my head and body. Ultimately, I gave up. I had the luxury to decide not to put myself through any more of it, especially after I saw the results of a CBS news poll that asked viewers whether the cop’s action was justified or if it was an act of police brutality. Seventy-three percent of those who voted agreed his actions were justified. Another kick in the gut.

Where was the feminist response to this incident? I don’t doubt for a minute that Black feminists talked about it amongst ourselves. Fact is, we all know only too well there is always a high price to pay for offending white sensibilities. There’s never been a safe public place for our rage. These days, some of us take less risk since the backlash blows can be particularly brutal. This means more conversations with friends–reminders that we are not crazy. But we keep coming back to one question: Where is bell hooks? We miss her.

My buddy KLO–a writer and former student of hooks’ at Yale—said,

[the punch reminded her] of the scene where Sophia gets decked by the white cop in The Color Purple while everyone just stands by looking, too. That punch demonstrates the continuity of black women being put in their place (violently!) whenever they should deign to stand up for themselves. No one likes a strong black woman, right? This is why bell is so important. She stands toe to toe with authority and TELLS IT LIKE IT IS. We know, because she writes about it, that she pays a huge emotional price for speaking truth to power.

bell hooks (née Gloria Watkins), humanist and kickass feminist theorist, has been a fearless cultural critic for more than three decades. For years, she has courageously taken to the front line and, with her academic sword, deconstructed everyday occurrences as evidence of white supremacist capitalist patriarchy. That punch brought me back to her essays in Killing Rage: Ending Racism. That punch is another moment that highlights how a black woman’s rage, as hooks wrote in the Killing essays, must always remain  repressed, contained, trapped in the realm of the  unspeakable. bell is relevant now more than ever!

I decided to hang in there, respecting the fact that bell is somewhere in Kentucky doing as she must do. And then the Sherrod affair broke out. A dedicated black woman was wrongly discredited by both the right and the left, white and black men, and had to confront power at every level all the way up to the White House. Of course, I found myself wondering … what would bell hooks have to say?

And as the Essence magazine controversy recently unfolded over their decision to hire a White fashion director, I remembered bell hooks’ penchant for pop culture and thought of her essay “Madonna: Plantation Mistress or Soul Sister,” from Black Looks: Race and Representation.

Essence.com interviewed hooks this year in honor of women’s history month. To the question, “What should Black women be paying attention to the most?” she provided a substantive and critical response. My favorite line from it– “I think the revolution needs to be one of self-esteem because I feel we are all assaulted on all sides”–sums up why I have been missing her presence and insights lately.

Really miss you, dr. hooks. Wish we could get you to come back.

What Happened in Afghanistan Isn’t Staying in Afghanistan
Poet Victoria Chang Is Done Apologizing for Her Ambition
‘Uncultured’: The Intergenerational Trauma of Girls Growing up in Cults