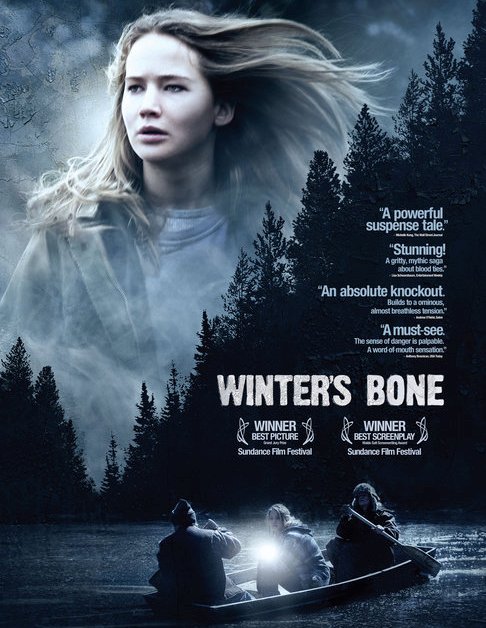 Winter’s Bone, directed by Debra Granik, is an excellent film not only for its gritty realism, its stunning and well- developed characters, its breathtaking cinematography and its telling of a necessary and socially relevant story, but also for something rarer than any of these things: depiction of strong, complex female characters whose prime motivation is not romance or shopping.

Seventeen-year-old Ree Dolly (fabulously portrayed by Jennifer Lawrence), is the tenacious heroine. She cares for her two younger siblings and her nearly catatonic mother, chopping wood, making deer stew, teaching her young sister spelling and math on the bone-cold walk to school and even carefully instructing her young siblings how to shoot, skin and gut squirrels when hunger necessitates as much.

Though the family practice of “cooking” methamphetamine is dominated by the male patriarchs of the Dolly clan, the film itself is dominated by the presence of a stunning array of female characters. Ree’s relationship with her best friend Gail, who has a baby of her own and a controlling husband to contend with, offers a rare portrait of the life-saving sustenance of female friendship. Ree’s elder female family members, who are all tied to controlling, abusive men, have learned the family honor code all too well, beating Ree as a warning that she had better keep in line. However, it is these same women who finally help Ree find her father, something she must do to avoid losing the family timberland and home (and her ability to support her mother and siblings).

The film offers an extraordinary portrait of the ways class and gender intersect, revealing how the patriarchal Dolly clan abuses not only drugs, but also its female family members. As such, the narrative offers a lesson about the feminization of poverty, illuminating how poverty’s vice is harder to escape and more likely to ensnare when one is female. In a particularly evocative early scene, Ree seems to be given just two choices–to join the Army or to join the ranks of young mothers after procuring a controlling husband of her own. Refreshingly free of any romance narrative (rare for any film, and especially for a woman-centered one) Ree is given no romantic interests. She does, however, consider the Army–an option the film realistically portrays as an economic necessity when one is young, poor and undereducated.

Alas, this gem of a feminist film has been attacked for the very thing that makes it so unique and so rare: its understated, implicit feminist narrative that rails against patriarchy, violence against women, cold-hearted capitalism and militarism, as well as critiquing the insidious and complex ways females are framed first and foremost as objects for male use and abuse.

For example, reviewer James Bowman feels the movie “needn’t have been so somber and depressing” and ties this to the film’s feminist viewpoint. He then suggests films would be better off without bringing oh-so-depressing feminism into the mix, writing,

Although I have no idea of Ms. Granik’s political views, she could hardly have made a movie more dark and depressing if she occupied an honored place among the sternest sort of that’s-not-funny! feminists.

Seemingly angered that the women in the film never “cease looking depressed and resentful of their lot in life,” he implies that “this bleak and frightening world” could be changed if only we would admit patriarchy ain’t so bad:

The patriarchy could not have held on for so many centuries if it were the tyranny the feminists believe it to be. There must be good as well as bad in it.

As noted, the bleak results of the patriarchal world the characters inhabit includes abject poverty, drug addiction, a violent family honor code and a future where one can either choose to deal drugs, have babies or join the service. Ah, but if only the women would smile a bit, all would be well in the world. If only the “that’s-not-funny! feminists” could lighten up and look on the bright side of their poverty-stricken lives and get themselves an abusive, controlling man to call their own!

The film has been widely praised (here and here and here, among other places), even by Bowman–it’s only its feminism he disdains. His review struck a cord for me, given the firestorm my review of Toy Story 3 on this blog caused, reminding me that feminism is blamed for being “dark and depressing” while patriarchy, sexism, racism and so on are let off the hook–as if feminists create all the problems in the world rather than point them out and attempt to remedy them.

Like Ree Dollly, it seems we feminists are destined for a difficult journey. Alas, as films such as Winter’s Bone make painfully clear, the journey may be long and arduous but is necessary and life-saving. Thanks to all you “that’s-not-funny feminists” travelling on the long road out of multiple, intersectional oppressions along with me. To fortify your resolve and remind you of your valued path, I highly recommend viewing Winter’s Bone. It may not involve cute, talking toys, but it sure packs a fabulous feminist punch.