Why Does a 30-Something Feminist Care About Dora the Explorer? - Ms. Magazine
Skip to content 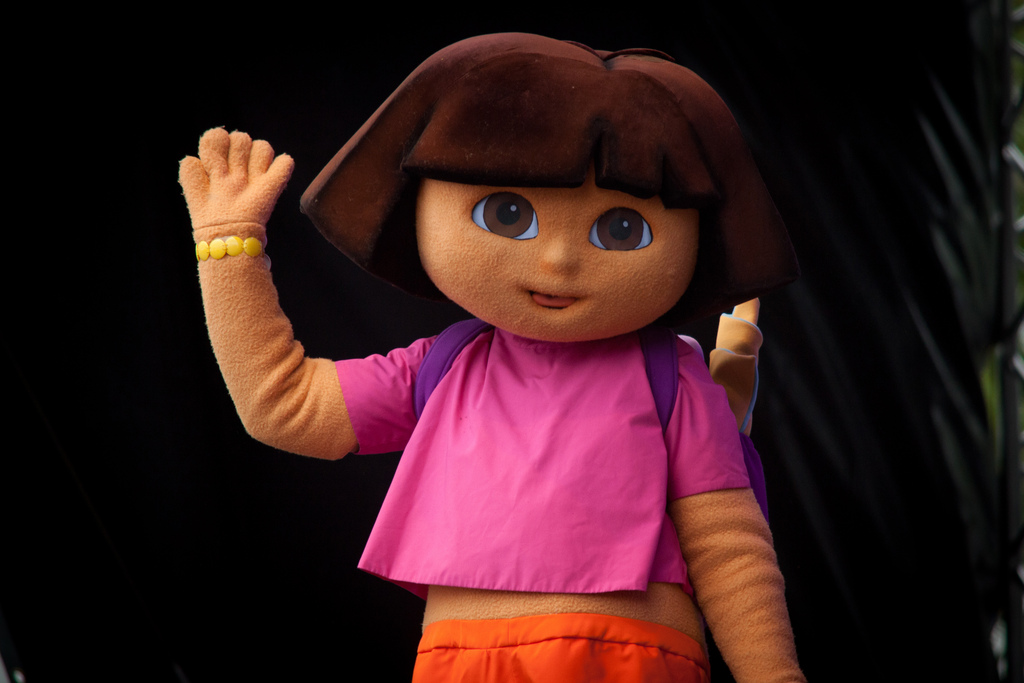 I can’t lie: I like Dora the Explorer, and I am 35 years old. My students bring me Dora paraphernalia and it adorns my office. Still, Dora and I have a complicated relationship.

I’ve been following her career since I saw an ad about her in Latina Magazine in 1999, announcing the arrival of the first positive Latina role model for girl children in the form of a Nickelodeon cartoon. For some, it may seem strange for an academic to be so invested in the transnational travels of a seven-year-old Latina cartoon character, but let me say that Dora Marquez has changed how we think about Latinas, for better or worse.

Ten years have passed and we’ve seen everything from Dora Spaghetti-o’s to the 2010 United States Census campaign “Children Count Too” featuring the a-Dora-ble face of Dora the Explorer. When the Nickelodeon show debuted in 2000, it was part of a network push to reflect how “[t]he Hispanic population is a very fast-growing population,” network president Herb Scannell told Daily Variety.  The show has been translated into 33 languages and has accounted for more than $11 billion in sales for Nickelodeon.

This past Saturday, August 14, was declared national Dora the Explorer day in cities such as Austin, Texas, Hialeah, Fla., Boston, Milwaukee and even in my California hometown, Salinas, which is hosting a Dora Birthday party at the El Gabilan Library where I spent my childhood summers devouring books. Sunday night was the world-premiere of Dora’s Big Birthday Adventure on Nickelodeon,  followed by a short documentary/interview with Dora and such Latina celebrities as Salma Hayek, Shakira and Rosie Perez.

The level of celebration for Dora’s birthday–including an interview with Anderson Cooper, who dubb 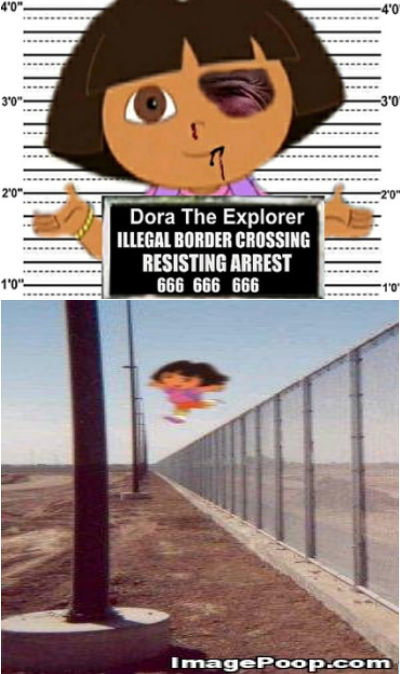 ed her “the hottest Latina on TV,” points to how invested the Nickelodeon network and its owner, Viacom, have become in marketing this particular image of Latina girlhood at a moment when backlash against Latina/o immigrants to the U.S. has never been stronger. With the passing of SB 1070 in Arizona in April and the copycat laws that are cropping up in other states, one must ask about the disjuncture between embracing  Dora as a Latina and rejecting other Latino/as as “illegal.”

It’s not hard to understand Dora’s appeal as a character and as a symbol. Just months ago, two images–of Dora the Illegal Border Crosser and Dora Jumps the Border–were critical to the critique of SB 1070, and could be seen at May 1 protests, plastered across the Internet and even on Jon Stewart’s The Daily Show. As an explorer with the ability to move freely through multiple landscapes (jungles, farms, snowy mountains, tropical islands), Dora has become a symbol of freedom for Latino/a peoples. And according to creators of the recent documentary, she represents warmth and heroism. She faces obstacles, finds a positive solution to problems, is a loyal friend and breaks down cultural barriers. Dora appeals to children of all races and social classes because her curiosity and sense of adventure pairs well with the show’s teaching of a little Spanish. Say her creators:

[The Spanish language component can] make [children] curious and interested in learning more, or simply make them aware of and comfortable with foreign languages. For our Spanish-speaking pre-school viewers, seeing Dora use Spanish might encourage them to take pride in being bilingual.

I would also add that we can see Dora as a proto-feminist role model. The values espoused by the show–friendship, cooperation and triumph over adversity–represent a politics of solidarity, arising from common responsibilities and interests, between members of different groups, classes and peoples. It’s a feminist politic that many U.S./Third World feminists have argued for in the last 15 years.

In Dora’s world, the ethos of helping those in need or less fortunate is part of what makes her a self-sufficient girl-child, negotiating power inequalities by standing up for what is good and right. Further, the fact that she is a young, smart, desexualized and empowered Latina in a world free of patriarchal policing talks back to the stereotypes of the spitfire or sexually over-productive welfare mother. The show suggests that young Latina girls can be intelligent, problem-solving, solidarity-building members of society.

This is where it gets complicated. There are all of these amazing things that Dora the Explorer has done, no question. However, she’s a fictional character, and one of the largest-grossing commercial images in the history of children’s television. She’s also Latina–a coalitional term used by various national groups such as Puerto Ricans, Chicana/os, Cuban Americans, Dominicans, Salvadoreans–rather than specifically Mexican American or Puerto Rican. Her creators have intentionally made her a generic Latina because that is more marketable, leaving her without a nation and without an ethnicity.

So while Dora teaches valuable ethical lessons about humanity, friendship and sharing, the show misses the boat on representing the specificity of multiple Latino/a histories, cultural practices and distinctions. This is why feminists should pay attention to Dora the Explorer. We can wish her a happy birthday, recognize the cultural transformations this figure has brought to discourses on race, class, culture and feminism, but at the same time be wary of her lack of historicity. When Shakira said, “Feliz Cumpleaños Dora, que te pases muy bien en tú vida” (Happy Birthday, Dora, may you have a prosperous and long life), one can only wonder what the next 10 years of Dora the Explorer will look like.

How One Woman Overcame Pandemics, War and Patriarchy to Build a Champagne Empire
Taliban Ban Girls From Returning to Secondary School: “Like Burying Them Alive”
Understanding Christian Nationalism: Is the Constitution in Trouble?