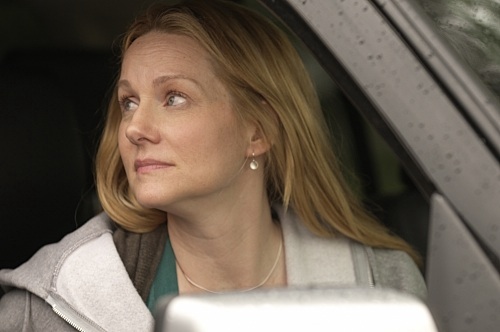 In the opening scene of The Big C, a new series that premiered this week on Showtime, suburban schoolteacher and mom Cathy Jamison (played by Laura Linney) wears a bright, strained smile. It’s the people-pleasing, trying-to-be-nice smile that many women put on when they try to negotiate for what they want. In this case, Cathy really wants a swimming pool–in spite of the small size of her yard and the contractor’s point that there’s simply no room for one. There’s something about that smile that tells us she will yield, and when she gives in and agrees a hot tub would make more sense we can tell she’s been there before. Wanting something, agreeing to settle for less.

This scene tells us all we need to know about Cathy’s back story. She’s been a good girl. She goes along. She doesn’t make waves. All of that was before she met the “Big C.” Once she is diagnosed with stage-four skin cancer, Cathy pushes the restart button on her life and begins to do what she wants for the first time ever. The results, so far, are exhilarating. In Linney’s hands, Cathy is an outlaw humorist, laughing in the face of death and staging one rebellion after another against conformity and the status quo.

“It’s not really a comedy about cancer,” says Linney. “It’s a comedy abut a woman who has cancer. And there’s a big difference.” In the first episodes, Cathy will try to keep her diagnosis to herself, so in most scenes (she’s in every one) the viewer is the only one who shares her secret.

Because we know that living has become profoundly intense for Cathy, we get why she’s determined to order only “desserts and liquor” in restaurants and why she has a short fuse with people like her cranky, antisocial elderly neighbor Marlene (Phyllis Somerville). In general, you wouldn’t root for someone who calls an older woman a “f—-ing c–t” or says the woman’s house “looks like s–t,” and who tells overweight student Andrea (Gabourey Sidibe), who mouths off in class, “You can’t be fat and mean. You can either be fat and jolly or a skinny bitch, it’s up to you.” Bubbling just below the surface of these unacceptably nasty comments is Cathy’s fierce desire to connect–by saying exactly what’s on her mind and accepting no less than honesty from those around her.

Comedy in The Big C is defiant. After that first scene with the tight smile, Cathy is more inclined to act up and laugh than she is to go along and pretend to be enjoying it. One slogan in the ads running for the series is “grab life by the balls,” a manned-up version of carpe diem, or seize the day. At first, the show will make you uncomfortable. Is it okay to laugh at a woman so desperate for affirmation that she asks her doctor to tell her whether her breasts look sexy to him? How about when the same woman cracks a joke in a monologue, then announces that she’ll be here all year “performing at stage four”?

The show relies heavily on gallows humor–laughing in the face of death, so named because of jokes made by condemned prisoners on the brink of execution. It’s a humor of bravado, of strength and power, more typically associated with men than with women. There’s a feminist spirit underlying the show that adds another layer of defiance to the comedy. It can be shocking when people in general don’t follow rules, but when a formerly mild-mannered, soft-spoken woman behaves badly, the incongruity is delicious. Linney plays this rebellion beautifully. You can see Cathy pause before she crosses a line, and when she goes there you’ll find yourself cheering. She tests the limits of what’s possible when you’re alive and paying attention. 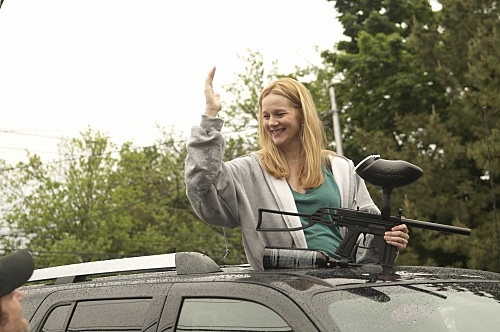 Simone de Beauvoir‘s classic tome The Second Sex mapped out a feminism rooted in existentialist ideas that can best be summarized as follows: You have this one life, so don’t follow a tired, inauthentic script based on someone else’s ideas of what it means to be a woman. Or, to put it even more urgently, she wrote in All Men Are Mortal:

From the hour you’re born you begin to die. But between birth and death there’s life.

The Big C reminds us that life is precious. Linney’s flawless performance–and the serious subject matter–will move you to tears. It will also help you laugh at what you most fear. And act accordingly.

Photos of Laura Linney as Cathy on The Big C by Ken Regan/SHOWTIME.