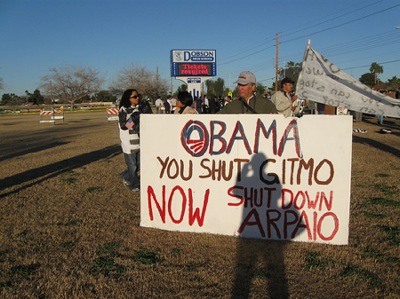 It’s been the summer of Arizona vs. the federal government, with lawsuits flying fast and furiously. The controversial state government now has yet another legal battle on its hands.

Today, the U.S. Justice Department filed suit against Arizona’s infamous Sheriff Joe Arpaio for his refusal to cooperate with a federal investigation of possible human rights abuses committed by his office.

Arpaio’s office said they have been compliant over the last few weeks. But they have refused to release records and documents that have been requested over the course of the year-long investigation.

As a follow-up to the “The Toughest Sheriff in America” in the Spring issue of Ms. magazine, it’s time to once again recount the misadventures of Sheriff Joe. In 1995, Arpaio and his office were first investigated for human rights abuses in Arizona prisons. That time, Arpaio complied by turning over documents and records that were requested by the feds, which led to sweeping changes in the Maricopa County prison system. In 2008, a federal judge again ordered Arpaio to clean up the prisons, after the ACLU testified that inmates were housed in unsanitary conditions and without adequate medical and mental health care. According to The New York Times,

Lawyers for the ACLU gave the example of a mentally ill inmate who was denied medication and severely beaten by other inmates. … Experts … said the jails had substandard cells and lacked adequate supervision and health screening for inmates.

Throughout the 2000s, Arpaio also battled the ACLU over whether women inmates are required to have access to abortions. (They are.)

In the current investigation, the feds are not only interested in the prisons but also in police activities that may involve racial profiling. This news comes on the heels of federal judge Susan Bolton’s ruling that blocks enforcement of the controversial elements of SB 1070–Arizona’s anti-immigrant bill that would have allowed police to inquire about anyone’s immigration status as long as they claimed a “reasonable suspicion” (which, according to the Arizona Peace Officer Standards and Training Board could include “traveling in tandem,” “dress,” “demeanor” and “significant difficulty communicating in English”). The federal government deemed SB 1070 so offensive that Secretary of State Hillary Clinton mentioned the bill in a report to the U.N. Human Rights Council that was intended to show “where problems persist in our society.”

Meanwhile, another federal judge in July struck down Arizona House Bill 2013, a 2009 law signed by Gov. Jan Brewer that sought to deny insurance coverage to same-sex partners. And the Justice Department is also suing the Maricopa Community College District for discrimination in hiring.