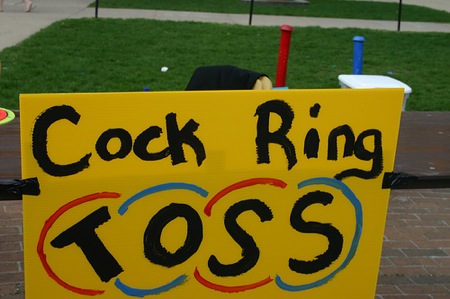 President Obama’s first budget proposal in 2009 redirected millions of dollars of federal funds from abstinence-only sex education programs to comprehensive sex ed. Unfortunately, many students are still graduating high school without hearing much beyond Joe Friday “just the facts, ma’am” presentations on how to–or more likely how not to–“do it.”

Into this educational breach comes Sex Week, a fun- and fact-filled event at college campuses featuring lectures, demonstrations, games, vendors and as much information about all things sexual as a college student could ask for. The truth is, kids are sexually active at an early age and by the time they get to college many have been “doing it” for a few years–so now they’re ready for some real information. They’re adults by then, so it’s OK to speak frankly, right?

Not according to Margaret Brooks, chair and a professor of economics at Bridgewater State University. Earlier this week, Brooks wrote a column for The Chronicle of Higher Education titled “‘Sex Week’ Should Arouse Caution Most of All,” warning against the dangers of Sex Week on campus.

She notes that Yale, Brown, Northwestern and the University of Kentucky have all held Sex Weeks recently and points out that student groups–not administrators–were the organizers. For Brooks, this is the beginning of the problem: University administrators need to take charge of Sex Week events if they are to happen at all, she insists. Other problems include the fact that the programs were open to the community, invited sex-industry representatives to campus and were sponsored by such nonprofits as the Kinsey Institute and Planned Parenthood.

The emphasis of most Sex Week programming seems to be more on providing entertainment and promoting pleasure, rather than on teaching students about sexual health and safety.

She did, however, acknowledge, “some sessions covered topics like women’s health and sex trafficking.”

Brooks offers several bullet points outlining her suggestions for “fixing” the problems she has with Sex Week. Her first two points are to put the university in charge, with the administration deciding on content and the faculty conducting the presentations. This, of course, is a non-starter. If Sex Week were up to most university administrations to schedule, it would never happen. And besides, Sex Week isn’t part of the curriculum; it’s more like a resource fair or cultural event. These types of events are typically run by various campus groups and student organizations that invite both on- and off-campus speakers and offer less-than-educational events and come-ons in order to get students to attend.

Other suggestions include holding same-sex-only discussion sections (so the students are more comfortable), forbidding non-student attendees, not allowing any outside sponsors or vendors, and basically making sure the university keeps a tight rein on all activities.

I find Brooks’ article unsettling for two reasons. First, it appears she is jumping on the conservative bandwagon that wants to restore in loco parentis–that civil liberties-quelling stance most colleges and universities gave up decades ago. Her suggestions all rest on the belief that college students are children who need to be guided in right-minded thinking and discussions about sex. But college students are legally adults, subject to the laws and responsibilities of adulthood. Shouldn’t they be treated as such?

We need to be more, not less, open in our discussions about sex with students. Age-appropriate Sex Weeks might be a good idea for all ages, starting at the elementary level. What Brooks fails to understand is that once students are in college, they are out here with the rest of us grownups. They have a right to explore all that the world has to offer, no matter how uncomfortable that might make her or other conservatives.

Above: A photo from University of Wisconsin Madison’s event Sexual Health Fest from Flickr user Mark Sadowski under Creative Commons 2.0.