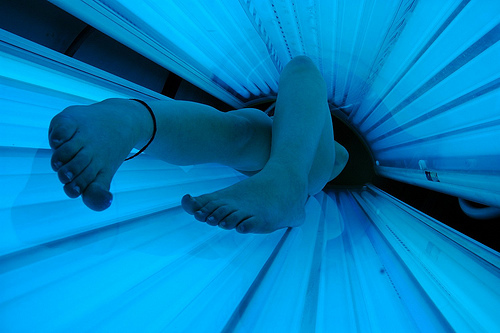 The National Health Care and Education Reconciliation Act of 2010 included a provision that requires salon tanners to pay a 10 percent tax each time they drop in for some faux sunbathing. The tax will generate an estimated $2.7 billion over the next ten years that will go toward the cost of extending health-care coverage to the uninsured.

The bill was met with an onslaught of opposition by conservative news media and right-wing political figures who claimed the tax was racist and sexist against white women. Uh, what? Not surprisingly, these pundits were made up of white upper-class men like Doc Thompson (standing in for Glenn Beck), who said the tax made him “feel the pain of racism.”

70 percent of those who frequent tanning salons are women and girls between the ages of 16 and 49, and Thompson didn’t feel the need to discuss the fact that the tanning trade is one that capitalizes on women’s insecurities in exchange for higher instances of skin cancer. Thompson’s view fell more in line with that of reality TV star Snooki of Jersey Shore, who blamed Obama’s skin color for the tax, saying that John McCain never would have let the bill pass because “he’s pale and would probably want to be tan.”

Conversely, it has taken lawmakers more than two decades to begin to correct prejudiced incarceration punishments for convicted crack cocaine users, more than 80 percent of whom are African Americans. Until last month, powder cocaine users, more often white and middle-class, would have to be caught with 100 times the amount as crack cocaine users to receive the same sentence.  But Thompson, Snooki and their counterparts don’t seem bothered by this kind of institutionalized racism.

While a bronzed body was once reserved for the working class, celebrity use (abuse?) of UV lights and spray-on brown hues has fostered an American addiction to tanning. In the early 20th century, sun exposure was believed to have curative and restorative effects, supplanting prior beliefs that white skin indicated gentility. While in some countries skin bleaching is now a popular cosmetic endeavor (which carries its own set of ideological indications), in the U.S. the glow still rules. A tan epidermis has evolved into a fashion accessory that screams sex appeal despite widespread knowledge of the cancer-causing effects of the so-called healthy glow.

Which brings me, finally, to bell hooks. In her essay “Eating the Other” in Black Looks: Race and Representation, hooks tackles the complicated terrain of commodity culture and racism. Citing Benetton ads and rap music as examples, she explains how Western advertising capitalizes on the white subconscious desire for “a bit of the Other.” The pursuit of the perfect tan is a paragon of this desire, a result of what hooks calls a “fascination with the primitive” stemming from a Western crisis in identity. She writes,

Ethnicity becomes spice, seasoning that can liven up the dull dish that is white culture.

Viewing dark skin as a fad, a seasonal indulgence, is a reductive fantasy that further distances minority groups by maintaining that white is the status quo.

“The message is that ‘primitivism,’ though more apparent in the Other, resides in the white self too,” hooks writes. She explains that the Western romantic fantasy of the Other is sustained by a “longing for the pleasure,” a transcendent bit of paradise, whether that be found in “a country or a body, a dark continent or dark flesh.”

This nostalgic yearning for a slice of primitivism reinforces a white imperialist narrative, where non-whites are considered uncivilized, exotic and savage. If we can simply purchase a connection to the Other, we needn’t think about how our everyday lives ignore or maintain institutionalized racism.

The perfect tan in U.S. culture is often coupled with the striking contrast of white blonde hair. hooks explains that most cultural consumption of racial difference provides “distance from whiteness, so that we can return to it more intently.” Like the tan-line phenomenon of the 1970s, the blonde-and-tan ideal is both an assertion of whiteness and play with the exotic. This new archetype takes its cue from years of fashion advertising that consistently prefers unrealistic and often racist images of uber-thin, brown-skinned models with flaxen hair, a combination that conjures notions of the primitive while maintaining Caucasian familiarity. Synthetic tanning creams have the same effect: They erase/replace white skin while still reminding lookers of its presence with that fake orange-y glow.

But isn’t valorizing the ethnic a good thing?  hooks reminds us that “one desires contact with the Other even as one wishes boundaries to remain intact.” One could argue that getting a tan bod necessarily promotes heterogeneous skin color within society. But the allure of golden skin is a politically immobile indulgence bound up with body image issues (tan bodies look slimmer) and sexual fantasies (the dark woman is hyper-sexual and wild, the white pure and chaste).

And did I mention that indoor tanners who use the beds at least once a month are 55 percent more likely to develop melanoma, and this rate only increases for women between the ages of 16 and 49? Writes hooks:

Encounters with the Other are… more exciting, more intense, and more threatening.

Is the threat of cancer actually fueling our fascination with UV beds? (Most women know the dangers of tanning, but 70 percent also think a tan makes them look more attractive.) The pleasure/pain dichotomy may be a part of it, but it seems what’s really driving women to the tanning salon is the West’s objectification of female bodies, both dark and light.