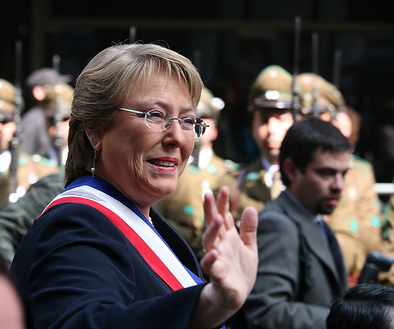 This week, former Chilean President Michelle Bachelet is named new head of UN Women; maternal mortality has fallen for the first time in decades; the French Senate votes to ban face veils in public; a senior British cardinal says women can’t be ordained; and a woman purporting to be Sakineh Ashtiani, who was sentenced to stoning, appears on Iranian TV.

UN Women will be a powerful force in our shared work to elevate the status of women and girls … As a longtime champion for the rights of women and girls and proven political leader, President Bachelet is the ideal person to launch this important new agency. [Her help] will strengthen the UN’s work on women and girls, mainstream gender equality throughout the UN system, and ensure that these issues enjoy their rightful status.

INDIA: The number of women dying from pregnancy and childbirth each year has dropped for the first time in decades, according to a study in The Lancet this week. India, Egypt, Romania, Bangladesh and China experienced the largest decreases. Worldwide, the number of maternal deaths has dropped from roughly 525,000 in 1980 to about 342,900–though it unexpectedly rose in a few countries, such as the U.S., Canada and Norway. Sub-Saharan Africa and South Asia still account for 87 percent of global maternal deaths. To explain the downturn, The Lancet points to lower pregnancy rates in some countries; better education; higher income and the associated improvement in nutrition and access to health care; and the increase in “skilled attendants” present at births. Some have criticized The Lancet’s failure to mention abortion in their study, as complications from unsafe abortions result in roughly one-fourth of maternal deaths.

FRANCE: This week, the French Senate voted nearly unanimously to ban face-covering Islamic veils in public. Having passed the Assemblée nationale in July, the bill “sailed through” the Senate with 246 votes in favor and only one against, according to The Guardian. The blanket ban will make it illegal, with certain exceptions, to cover one’s face in public anywhere in France. While opponents of the ban believe that it will lead to tensions and the marginalization of France’s Muslim population of five to six million, justice minister Michèle Alliot-Marie, who presented the bill to the senate, believes that living with one’s face uncovered is a “question of dignity and equality,” as wearing a veil “calls into question the French model of integration, founded on the acceptance of our society’s values.”

SCOTLAND: Despite polls indicating last weekend that nearly two-thirds of British Catholics believe “women should be given greater authority and status within the church,” one of Britain’s most senior Catholics announced this week that this won’t be happening anytime soon, and that women becoming ordained as priests “isn’t even considered by us,” according to The Guardian. Cardinal Keith O’Brien went on to say that women had never been amongst Christ’s apostles.

IRAN: A woman identifying herself as Sakineh Ashtiani, the Iranian woman facing death by stoning after being convicted for adultery, appeared on Iranian TV last night denying that she has been whipped or tortured after allegedly enduring 99 lashes in early September. The blurred image of the woman purporting to be Ashtiani said:

I have not been tortured, at all … Nobody has forced me to appear before camera and whatever I say is my own words.

Ashtiani’s son Sajad and lawyer Houtan Kian, however, believe that the interview was forced, and that it was aimed at “preparing the public opinion inside Iran for her execution.” “She has been denied her very principle right of visiting her lawyer for more than a month and I, as her lawyer, have been harassed and threatened,” said Kian.