Secretariat: A Housewife, Her Horse and Their Legacy - Ms. Magazine
Skip to content 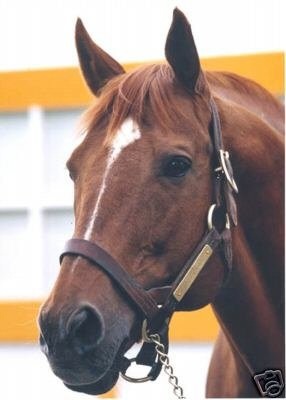 If you love horse movies, then you’ll probably love Disney’s newest, much-hyped Secretariat, which fits firmly in the genre of other recent triumphant equine epics–Seabiscuit (2003), Hildalgo (2004) and Dreamer (2005)–with one notable exception. Despite the film’s plethora of close-ups of the stallion’s deep, soulful eyes and its re-creation of some  of Big Red’s most thrilling races, Secretariat isn’t really about the horse; instead, it’s a thinly-veiled ode to equality, courage and how a housewife becomes a savvy businesswoman in the eyes of her family and a nation.

Don’t get me wrong, Secretariat is still the star of his own movie; after all, he is a racing legend, something that the heavy-handed Biblical comparison which opens and closes the film strains to remind us. But the film’s ultimate goal seems to be to tell us the back-in-the-barn story of Big Red’s legacy, which goes something like this, “Behind every great horse, there’s a great woman.”

That woman is Penny Chenery (played by Diane Lane), who, much to her husband’s ire, is referred to by her maiden name instead of her married name, Tweedy, by most of the racing establishment and throughout the film. At the start of the film it’s 1969 and Chenery’s just another suburban housewife living in Colorado when she gets the call that her mother has died and flies home to her parents’ Virginia horse farm for the funeral. There she finds a once-great farm slowly deteriorating and an ailing father too ill and resigned to put up a fight. Seeing something unique in the bloodlines of a foal due the following spring, Chenery picks up the slack at the stable, firing an untrustworthy trainer and biding her time until the little red colt arrives and changes her life.

The first half of the film progresses slowly, punctuated by some arguments between Chenery and her brother, who wants to sell the farm, and Chenery and her husband, who sulks when his wife leaves him at home with their four children every few weeks to see to her father’s horses. And there are moments throughout where Lane’s acting feels surprisingly stilted, something I’d rather attribute to hit-or-miss writing than her skills as an actor, since many lines she’s given read straight from the inspirational movie playbook: Insert your plucky platitude here. On the upside, John Malkowich, who plays eccentric trainer Lucien Laurin; Otto Thorwarth, an actual jockey who plays famous jockey Ron Turcotte; and Margo Martindale, Chenery’s witty confidante Miss Ham, come off as far more at ease in their roles.

Based on a true and very well-known story, Secretariat does feel a bit too clairvoyant to be suspenseful. Characters wait on the edge of their proverbial seats for something–Secretariat’s incredible Triple Crown win–that they shouldn’t have any inkling of yet. In fact, groom Eddie Sweat’s (Nelsan Ellis) pre-Belmont proclamation, yelled to an empty racetrack, “You’re gonna see something you ain’t never seen before,” feels so contrived that it must be a moment designed solely for the film’s previews–where it not-so-coincidentally takes pride of place. Perhaps we’re supposed to believe that Chenery had some sort of premonition about her colt’s future, but I’d rather attribute her foresight to business savvy and good horsemanship than ESP.

Despite the fact that we all know how Secretariat’s story ends, the race scenes are absolutely spectacular–making an excellent case for seeing this film in the movie theater, where the fast-paced action, the wild fight for dominance on the track and the pounding of horses’ hooves are rendered especially vivid. The film even features one of the original races, shot in grainy 1973 stock and viewed on the Tweedy family’s tiny television; it’s a moment that is surprisingly touching and just as exciting as the more crisply-recreated races that dominate the film.

Almost as entertaining as the horse-racing is the competition between Chenery and rival horse owner Pancho Martin (Nestor Serrano). His continual taunts that she’s “just a housewife” and has no business racing horses provide a nice moment of comeuppance when she quietly and calmly proves him wrong, through deeds if not words.

Secretariat is being marketed for children as well as adults–indeed, at least a third of the audience members with whom I saw the film were under the age of twelve–and for good reason. There are enough thrilling races, conflicts between Chenery and her family and humorous exchanges between Chenery and Laurin to keep adults entertained, while the beauty of Secretariat‘s equine star and the film’s humanism are something children can well appreciate. One can only hope that younger viewers are also touched by Chenery’s gumption and her unwillingness to back down despite overt sexism and the ages-old struggle to balance family and career.

There’s no question that the thrust of the film is ardently feminist–Chenery’s husband even tells her just prior to Big Red’s fateful Belmont run that she’s shown her children what a real woman is: strong, smart and courageous. In typical Disney style, though, Secretariat is mostly about the triumph of the human spirit over adversity, with some added racing excitement and anthropomorphism of the soulful red colt thrown in for good measure .

Photo of Secretariat from Flickr user Banamine, under license from Creative Commons 2.0.