The Cross-Dressing Girls of Afghanistan - Ms. Magazine
Skip to content 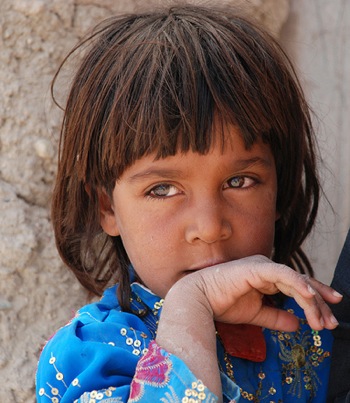 Life & Style is not happy with Angelina Jolie’s daughter, Shiloh Jolie-Pitt, and her boyish new look. The four-year-old’s short hair, boy’s pants and total lack of frilly summer dresses has got the tabloid crying child abuse. And as Feministing notes, this media frenzy over a young girl who dresses like a boy reminds us of our society’s continued discomfort with gender experimentation.

But if Shiloh lived in Afghanistan, she’d bring pride and social standing to the Jolie-Pitt family instead of a tabloid scandal.

According to an excellent article in The New York Times recently, Afghan families don’t have only daughters and sons. They also might have bacha poshes–literally daughters “dressed up as boys.” A bacha posh enjoys all the freedoms afforded to a boy in Afghan culture, including the right to have a job, to play sports and to travel freely. Moreover, the presence of a bacha posh increases the family’s social standing in the same way that a permanent son would. Generally, the child’s temporary cross-dressing lasts until puberty, after which the family’s daughter miraculously reemerges just in time for marriage.

To be sure, this practice underscores the gross misogyny in Afghanistan, where there is intense social pressure to have a son (only men can inherit wealth or pass down a family’s name), extreme restrictions placed on women and a culturally-ingrained devaluation of women. As one bacha posh told The New York Times:

People use bad words for girls. … They scream at them on the streets. When I see that, I don’t want to be a girl. When I am a boy, they don’t speak to me like that.

On a theoretical level, however, this practice provides an extraordinary example of gender performativity. This theory, introduced by Judith Butler in her groundbreaking 1990 book Gender Trouble, argues that gender is an inherently unstable construct that must constantly be performed–through millions of seemingly inconsequential gestures, words and actions–in order to exist. She wrote:

Consider gender as a corporeal style, an “act,” as it were, which is both intentional and performative.

Or, as Simone de Beauvoir famously wrote, “One is not born a woman, but rather becomes one.”

The testimonies of the bacha poshes in The New York Times articles speak to this performativity. Consider Shukria Siddiqui, who was a knife-carrying, jeans-wearing 20-year-old man when her aunt gave her a skirt and told her she was to be married. Siddiqui’s account of her transformation back to womanhood centers on relearning the gender performance:

I had to learn how to sit with women, how to talk, how to behave. …When you change back, it’s like you are born again, and you have to learn everything from the beginning.

Siddiqui didn’t know how to act as a wife. She tripped over her burqa, she didn’t know how to cook. Other bacha poshes interviewed demonstrated similarly jarring characteristics: They didn’t lower their eyes like other women in Afghanistan; they yelled, they hit their brothers. A mother of one young girl masquerading as a boy said: “My daughter adopted all the boys’ traits very soon. You’ve seen her—the attitude, the talking—she has nothing of a girl in her.”

This statement is particularly telling of the separation between sex and gender in this practice. For this mother, her daughter’s masculine attitude, voice and mannerisms are enough to override the girl’s XX chromosomes and her female sex organs. Forget sex–this practice suggests that in Afghan society gender is only skin (or pants, or eye-contact or an assertive voice) deep.

And here is where the cultural practice of bacha posh becomes disruptive. Former bacha poshes know firsthand that the traits of femininity–the very characteristics that cause the devaluation of women in many cultures (including ours, as shown by Citibank’s recent “advice” to women employees)–are learned. That is not to say that women should act “like men.” Rather, the learned-ness and malleability of gender, as demonstrated by a bacha posh, can be used to challenge a hierarchy in which men reign supreme. If society recognizes that swapping a black skirt for green pants is enough to win a young child respect and freedom, perhaps that society will begin to realize that there’s no reason to impose a gender hierarchy in the first place.