The mediasphere has been buzzing with skepticism since Variety announced over a year ago that Tyler Perry would write, direct and produce the adaptation of Ntozake Shange’s 1975 choreopoem For Colored Girls Who Have Considered Suicide/When the Rainbow is Enuf. The film is the first production for Perry’s 34th Street Films (a production division of Tyler Perry Studios) which was created to expand the Perry brand into new markets: read more mainstream, mostly white audiences. It’s also Perry’s first attempt at tackling a serious piece of Black women’s history, as Shange’s work emerges out of a significant time for Black women writers, among them Michele Wallace, Audre Lorde, Alice Walker, Barbara Smith, Nikki Giovanni and Toni Cade Bambara.

Perry is the most financially successful Black filmmaker in Hollywood ever, named in 2008 by Forbes magazine as a next-generation billionaire. He made his fortune telling stories that appeal to working and middle-class Black audiences, branding them as representative of contemporary hard-working Black life in America, with an emphasis on Christian ethics and the heteronormative family. His narratives have been described as uncritical, one-dimensional, trifling, reductionist and frivolous, failing to capture the nuances of life for poor and working class Blacks, particularly around issues of sexuality and spirituality. New Yorker film critic Hilton Als likened Perry to a preacher who entertains, “hardworking black Christians who wanted, at least for a couple of hours, to be distracted from the truth about their failure to advance in their own country.”

a six-foot-five, homespun, truth-spouting, pot-smoking, politically incorrect middle-aged black matriarch, wears a silver wig, spectacles and a series of interchangeable floral-print dresses. … As the sometimes beleaguered go-to person for any number of younger relatives who find themselves in bad marriages, broke or incapable of managing their children, the take-charge Madea busts ass while brandishing her handgun, fighting to impose emotional order in her world. 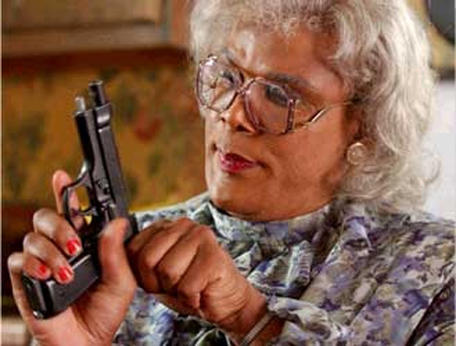 Madea is part of a legacy of Black entertainers performing this Sapphire qua Mammy character in drag, such as Flip Wilson’s Geraldine, Jamie Foxx’s Wanda, Martin Lawrence’s Sheneneh and pro-basketball player Larry Johnson’s Grandmama in Converse shoe commercials. She is the Black matriarch–a fast-talking, lip-smacking, head-rolling, finger-snapping, fierce women who, when crossed, will cut you in a hot second.

Ms. blogger Courtney Young criticized Perry’s depiction of the Black female characters in his films as a reflection of a “conservative gender politics that eschew a more progressive, inclusive agenda.” Yet, what is most damaging about his characterizations is that they are coming not from the lived experiences of Black women, but from the mediated gaze of a Black man. Madea, funny and keepin-it-real as she may be, is still a Black man’s second-hand drag performance of Black matriarchy. Black women do not have the same access to the resources and opportunities to tell stories about our lives, and classic Black feminist texts adapted from the perspective of a man is problematic.

Some of the most virulent critiques of Perry’s work center around the debate over representations of class difference within the African-American community. In a 2009 Entertainment Weekly article, Benjamin Svetkey, Margeaux Watson and Alynda Wheat suggested that Perry’s films were made for “churchgoing, working-class black women, not urban hipsters (or tenured professors).” Black cultural critic Todd Boyd of USC argued that all of Perry’s films “demonize educated, successful African Americans,” which plays on longstanding issues of class conflict within the African American community. Many remember the infamous public feud between Spike Lee and Tyler Perry (Lee compared Perry’s films to Amos and Andy). But who are we–with our playa-hater degrees (PhDs) and elitist artistic standards–to judge what the masses find tasteful? We have to resist the temptation to form dichotomies between artists whose work runs the gamut from quality to coonery. Is Lee’s character Mars Blackmon, who was hawking expensive Nike kicks to kids in the ‘hood who were killing themselves for a pair of sneakers, any less degrading than Tyler Perry’s Madea?

Against the backdrop of harsh criticisms of Perry’s films comes the controversy over the screenplay of For Colored Girls, which involves Black female filmmaker Nzingha Stewart. In an interview with Shadow and Act, Stewart admitted that she optioned the play with the support of Ntozake Shange, completed a draft of the script and secured several high profile actresses–including Angela Bassett, Alicia Keys and Sanaa Lathan, none of whom appear in the final version of the film. While the details of the film rights remain hidden with the parties involved, Stewart will receive executive producer credits on the film. Speculation aside, Stewart is the only Black female producer on the project, and Tyler Perry maintains full writing credits for the screenplay.

Can Perry evolve from master of the chitlin circuit to one of Hollywood’s most respected filmmakers with For Colored Girls? Mark Anthony Neal, professor of African and African American Studies at Duke University, seems to think so, albeit not necessarily on Perry’s merits alone but on the written work itself. For Colored Girls has been reproduced on college campuses and in community theaters for more than 20 years and is part of the Black feminist zeitgeist. I agree with Neal that Shange’s powerful words make it possible for even a commercially successful entertainer like Tyler Perry to produce a compelling work of art.

In the foreword of the 1977 edition of For Colored Girls, Shange suggests that Black women must internalize an “exaggerated sense of freedom” in order to live out the most authentic version of ourselves. Should we, as women, focus our energies on critiquing one man’s version of our narratives? We should be creating spaces to tell our stories in ways that are truthful, healing and break conventional understandings about our lives. Meanwhile, Shange isn’t waiting around for her voice to be represented:

I have other work to do/

This is the first in a series of posts leading up to the release of the film For Colored Girls.

Photos From Very Perry Films and The Savvy Sista.