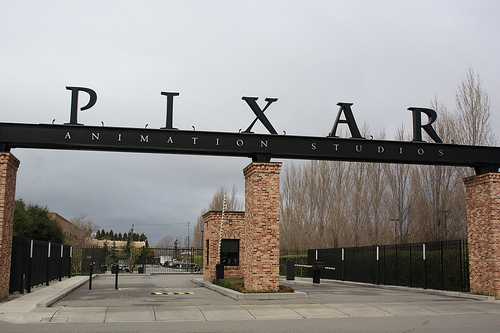 At the end of The Jungle Book, Mowgli’s love interest sings of her future daughter, “I’ll send her to fetch the water, I’ll be cooking in the home.” Some 43 years later, her metaphorical daughters populate not only Disney films, but also those of Dream Works and Pixar. Alas, not only do these animated daughters still accord to gender norms for the most part, but so too do their creators. Most animators, screenwriters, directors and producers are still men, getting to be the Mowgli-type adventurers in Hollywood, while their female counterparts often remain figurative water fetchers.

Brenda Chapman, the woman director who broke into Pixar, reportedly a boys club, was sadly turned back into a non-directing pumpkin last week–no fairy-tale ending for her as the director/heroine of Brave, an animated film she wrote and has been developing for several years. Instead, Mark Andrews has reportedly taken over directorial duties. The title of his previous Pixar short, One Man Band, is a fitting way to describe what seems to have become Pixar’s one-note dedication to male-helmed and -focused films.

While changes in directors are common in the film world (so much so that “they hardly merit reporting,”) this story is causing quite the stir as Chapman was Pixar’s first woman director; all eleven previous films were directed by (and featured) men. Pixar is not unique in this regard: As Sharon Waxman & Jeff Sneider write, “The animation industry is not known as a warm and fuzzy place for women.” In Hollywood more generally, as Waxmen and Sneider further note,

Women remain a fraction of the industry’s directors, just 7 percent according to the latest study–the same ratio as a decade ago.

It was only this year, after all, that a woman finally won Best Director at the Academy Awards, despite the fact women have been involved in filmmaking since its beginnings in 1896.

As Melissa Silverstein of Women and Hollywood puts it,

Directors get fired all the time.  But this firing has people up in arms for a variety of reasons.  First, because they touted her as their first female director only a month ago; second, she is an experienced animated director; third, the firing doesn’t seem to be rational and folks even in the business are confused as to why it happened.

Thus, this individual case of firing is pertinent to a larger problem–the lack of females holding powerful studio positions.

The bigger issue here is not the firing but why Pixar has never had a female director to begin with. The bigger story to my way of thinking is the utter lack of female input behind the scenes and the lack of female protagonists on screen.

Do I think there’s sexism in Hollywood? Hell yeah there is. I’ve witnessed it first-hand, ergo my leaving the business. But there’s also racism and homophobia. This is a contributing factor as to why so many women get out of the business. It is not a hospitable work environment for females.

In films, this lack of women behind the scenes seems to translate to a certain type of woman character in animated films–one who is less heroic, adventuresome, independent and important than the male robots, toys, cars and humans that surround her.

With Disney figuratively cutting Rapunzel’s powerful locks by making Tangled more boy-focused, and now Pixar taking away Chapman’s directorial wand, what’s next–a film about a female warrior who suddenly becomes a gooey-eyed animal lover? Oh, that’s already been done (Pocahontas). How about taking a you-go-girl patriarchy-defier and stealing her voice? Oh, that one is taken too (Little Mermaid).

Wait, I know: a movie about a matriarchal society filled with female power-players that have to be saved by a tremulous boy. (Oops, that’s Bug’s Life). Maybe we’ll have to settle for a Toy Story 4 in which the girl is more than love interest, helper, or background player. Please, Pixar, bring Bonnie front and center, give Jessie a main storyline, and ditch the “that’s so gay” Ken storyline. And get with the Bigelow effect already: Encourage more women directors! really, now, those big-boy pants of yours need to come off–let some women lead your one-man band, would you?