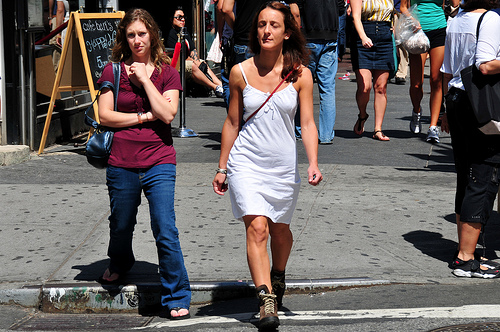 It’s been a long time coming, but yesterday the New York City Council held its first-ever hearing on street harassment of women and young girls. In 2009, city politicians investigated groping and assault on the subways, but they had yet to extend their inquiries above-ground.

Council Member Julissa Ferreras, Chair of the Women’s Issues Committee, organized the hearing after high school girls in her district told her of daily verbal harassment near their school. “I was outraged,” Ferreras said. She recounts her own high-school experience of being cat-called on the way to school:

That was the fastest I’ve ever walked. And I was probably 14 years old in the 9th grade.

Experts, activists, high school students and representatives from a variety of organizations, including the Center for Constitutional Rights and NOW’s New York Chapter, assembled in a packed room just across the street from City Hall to present data, share their jarring personal experiences of harassment and implore legislators to act.

Because of street harassment, from a young age women learn that public spaces are male territory They learn to limit the places they go, they try not to be in public alone, especially at night, and when they are alone, they stay on guard.

The harassment of teenagers and young girls was a particular topic of concern. Tracy Hobson, Executive Director at The Center for Anti-Violence Education said that for young girls, harassment is “sometimes sort of the first sexual experience” and noted a disturbing trend:

It used to be more teenagers [reporting street harassment] and now we’re actually hearing from 11- and 12-year-olds.

The idea that young girls are being forced to contend with men and boys’ desires before we even have a chance to figure out our own is really, really troubling.

I almost instantly wished I could have gone back on the train and had the courage and power to stand up to the stranger and let him know … that he was sick, that what he did was messed up, that I shouldn’t be blaming myself for it.

The hearing moved quickly from an airing of grievances to concrete solutions. Emily May of Hollaback!, had built consensus among the activist groups during the days leading up to the hearing on three first steps for the council to crack down on harassment. The steps, which she presented, include:

We’re putting out the request [for a study] immediately and we just wait for the administration to respond.

Though most of the conversation focused on creating an anti-harassment culture, some testimonies broached the issues of culpability and enforcement. One woman reported that when she contacted the NYPD about being harassed, they just told her to let them know if it happened again. Said Ferreras,

I think we need to start having a conversation with NYPD and how NYPD receives these complaints and that this isn’t OK. Once is enough and we don’t have to wait for it to escalate.

The hearing was not dominated solely by women’s voices. Council Member Jumaane D. Williams said that, as someone who used to brush aside cat-calling, he felt “amazed and sort of ashamed” listening to women’s testimonies, adding,

I want to lend my maleness as much as possible to this and make sure that we get our male counterparts involved and understand that this is an issue for all of us.

Brian Bradley, 14, aka The Astronomical Kid, whose hip-hop song “Stop Looking at My Moms” has garnered hundreds of thousands of views on YouTube, said—to applause:

Some might say that me being a 14-year-boy doesn’t qualify me to speak as an authority on this particular subject, but I disagree. I’m not just a 14-year-boy, I’m also a big brother to a younger sister … and the son of a single mother who struggles every day with the humiliation brought onto her by the unwanted unprovoked attention of disrespectful men every time she leaves the house.

Watch “Stop Looking at My Moms”: The Truth My Mother Told Me