Can a U.N. Resolution on Women and Peace Transform Our World? - Ms. Magazine
Skip to content 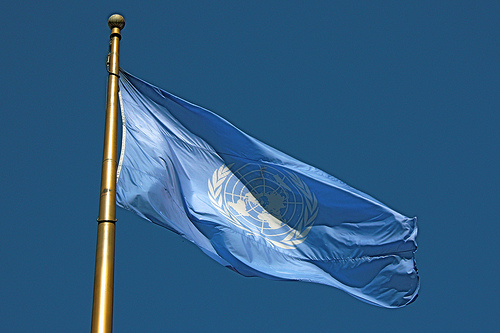 Ten years ago the United Nations Security Council passed UNSCR 1325, the first-ever resolution on women, peace and security. 1325 sets a new standard for how conflicts are resolved: Women must participate fully in peace negotiations and post-conflict reconstruction. If this really works, it will transform our militarized world.

The hard part is implementation. Patriarchal attitudes and women’s unequal access to formal education and political leadership stand in the way, as well as “Bureaucratic inertia, leadership vacuums, empty rhetoric and fundamental misunderstanding about this agenda,” according to a recent MIT report.

On this 10th anniversary, it’s important to recall why 1325 came about. During the 1990s the world witnessed once again the systematic use of rape as a weapon of war. The numbers were astounding: half a million women in Rwanda raped, about 50,000 women in Croatia and Bosnia-Herzegovina, and as many as 64,000 women in Sierra Leone.

We also saw women working to resolve conflicts and rebuild communities in the aftermath of war. Women from Cambodia, Guatemala and Northern Ireland emerged as crucial voices for peace, mobilizing across national, ethnic and religious divides and using their networks to mitigate violence.

These events catalyzed New York-based feminists to found the NGO Working Group on Women, Peace and Security. It drew on decades of collaborative work for women’s rights, such as the UN Convention on the Elimination of All Forms of Discrimination against Women (CEDAW), and the 12-point Platform for Action developed at the Fourth World Conference on Women in 1995. In October 2000, Netumbo Nandi-Ndaitwah, then Minister of Women’s Affairs in Namibia, initiated 1325 when it was her country’s turn to chair the Security Council. It was adopted unanimously.

Since then, women’s organizations in war-torn areas such as Afghanistan, West Africa, Chechnya and Nepal have used this framework to document gender-based violence in war, to initiate dialogue across lines of ethnicity and culture, to urge former combatants to give up their weapons and to claim seats at official peace talks. Researchers Kavitha Suthanthiraraj and Cristina Ayo report [pdf]:

Undeterred by rebel groups, authoritarian regimes, cultural restrictions or resource limitations, and often at great personal risk, women continue the work of promoting peace and security in their communities.

The Security Council has given 1325 more teeth with Resolutions 1820 (in 2008) [pdf] and 1888 [pdf] and 1889 [pdf] (in 2009), focused on greater protection from sexual violence in conflict zones and more gender sensitivity in post-conflict reconstruction. In 2010, UN Secretary General Ban Ki Moon appointed Margot Wallström, a former minister in the Swedish government, as Special Representative of the Secretary General on Sexual Violence in Conflict—another step toward making 1325 work.

In response to sexual exploitation by male peacekeeping forces, the UN Department of Peacekeeping Operations has recruited more women as civilian police and peacekeepers. India and Bangladesh have recently sent all-female units to Liberia and Haiti. This is important because, according to the UNFPA, “Women who have survived assaults may be more likely to report incidents to women officers.”

Like many UN resolutions, 1325 is not legally binding. Governments are supposed to initiate National Action Plans for implementation, but only 20 countries have done so, 14 of them in Western Europe. According to UNIFEM, fewer than 7  percent of negotiators on official peace delegations were women in the years 2000 to 2008. A bright spot is South Africa where 50 percent of all negotiators were women and a subcommittee ensured that gender perspectives aligned throughout. An over-emphasis on numbers can miss the point, however. Women who participate in peace delegations must be in touch with women’s needs and willing to argue for them. But it’s no wonder that 40 percent of peace processes fail within the first 10 years: Virtually no women are at the peacemaking tables.

Today the need for 1325 is as great as it was a decade ago. In the past ten years, half a million women have been raped in the Democratic Republic of Congo. In Colombia, four million people have been displaced by conflict, nearly 60 percent of them women.

Last week, Secretary of State Hillary Clinton urged members of the United Nations to face what remains to be done. She announced that the United States would contribute $44 million towards activities that empower women, including $17 million for strengthening women’s rights in Afghanistan and $14 million to NGOs working to make clean water available in conflict zones. She also committed to initiating a U.S. National Action Plan under UNSCR 1325–a small opening, perhaps, in changing the direction of U.S. militarized foreign policy.

But 1325 won’t work without courageous and persistent organizing by women’s groups in the United States and around the world. It will take the efforts of transnational organizing efforts like the World March of Women, which recently mobilized tens of thousands of women from the Congo and other nations to march in Kivu against sexualized violence in war. Or the Manipur Gun Survivors Network, which goes door to door in household disarmament campaigns. And it will take all of us realizing how much war and militarism takes away from genuine human security.

Gwyn Kirk is a founding member of Women for Genuine Security; Christine Ahn is the senior research and policy analyst at the Global Fund for Women.

About Gwyn Kirk and Christine Ahn