This week, Arianna Huffington announced the Huffington Post’s latest section: HuffPost Divorce. Her plug: “Breaking up is hard to do… but reading about it isn’t.” Upon Monday’s launch, however, there appeared a column that women’s rights advocates took very hard: a piece by Dr. Richard Warshak promoting the discredited “Parental Alienation Syndrome,” or PAS.

Parental alienation is a dangerous custody-battle concept that has been used primarily against mothers–and in particular, mothers trying to protect themselves and their children from hostile or abusive ex-partners and fathers. As R. Dianne Bartlow explained in her Summer 2010 Ms. article, “There’s Nothing Friendly About Abuse”:

PAS theorizes that most accusations of child abuse (especially sexual abuse) made during a custody battle are actually fraudulent. Not only are the charges false, says the theory, but they are deliberately undertaken by one parent (in most cases, the mother) to “alienate” the child from the other parent (generally, the father).

Frighteningly, PAS has allowed abusive or otherwise hostile fathers to gain custody of their children and then forbid the children contact with their mothers.

Yet parental alienation is not accepted as a valid theory by the American Psychological Association, and was rejected from the DSM-V. Without a real psychological definition, it has devolved over the years into a label for any negative testimony about the father by the mother (even if it’s true). It’s also now promoted as gender-neutral, but the parent most often labeled the “alienator” remains the mother. It’s also one hell of a cash cow for psychologists who make a living from it.

In keeping with all this, Warshak’s post, “Stop Divorce Poison”, gives an overly simplified description of “alienation” that could describe nearly any hostile or cantankerous relationship: “persistent bad-mouthing, lies, exaggerations, overlooking positives, and drum-beating negatives.”

A half dozen domestic violence and motherhood activists, including myself, descended upon Warshak’s column to leave comments describing how discredited PAS really is. But, as I witnessed and others report, by the evening of November 9, most of the comments (nearly a dozen) posted by critics had been deleted in the space of five minutes. According to those I’ve spoken with, deleted comments contained valid source material from professional organizations citing:

Here is an example of a comment that was removed: 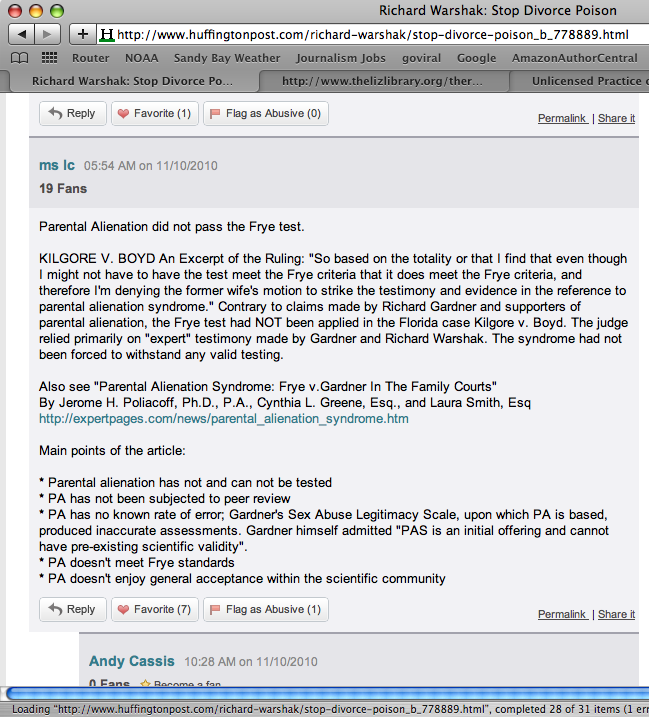 Another activist and I wrote to David Flumenbaum and Arianna Huffington to inform them about the censorship of opposing, critical views. Both of us received an email in return from Social News Editor Adam Clark Estes, who wrote:

I’ve double-checked the comments and all of those missing were removed in accordance with HuffPost’s commenting guidelines. You can read more about those here:

That said, we’re in touch with Dr. Warshak about his comments and will do our best to keep the conversation flowing in the future.

When considering the above screenshots (pure facts devoid of non-objective commentary) it’s unclear which part of these guidelines apply:

(I) The Huffington Post welcomes all users to join our community and to comment and treats all members of the community equally.

(II) We want the Huffington Post to be home to open, transparent conversations in which people connect, discuss, share ideas, and debate the issues.

(III) We are also committed to maintaining a non-toxic atmosphere.

(IV) In order to preserve a functional and civil conversation, we do not allow trolls, trollish behavior, or stalking.

(V) Members of the HuffPost community deserve to be free from spam, and we do not allow posting the same comment multiple times within one thread or on multiple threads.

It’s frustrating that the supposedly progressive HuffPost has given a platform to Dr. Richard Warshak, one of parental alienation’s most fervent supporters, but won’t give the same platform to its commenters.

On November 10, activists returned to the article to comment; it remains to be seen if their comments will be deleted–or whether they’ll fall victim to HuffPost-moderation’s thin skin. If a blog can delete comments opposing their viewpoint, then what’s the point of comments? You might as well change the name to “compliments.”