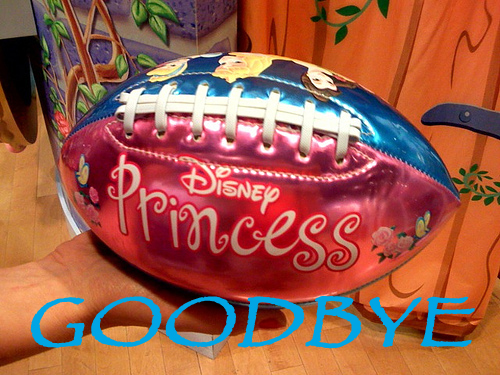 At first it seems like possible good news. Disney/ Pixar announces: no more fairy tales, code for princess movies. Great! No more damsels in distress who end the movie by landing a man. Now we’re going to have a slew of new movies with cool girl heroes who bravely rescue boys from peril, exuding power and beauty by performing all kinds of risk-taking tasks and challenges.

First of all, the reason the fairy tale movies are stopping is because Disney/ Pixar executives have decided that little girls aren’t worth making movies for at all.

The Los Angeles Times reports the fairy tale movies “appealed to too narrow an audience: little girls. This prompted the studio to change the name of its Rapunzel movie to the gender-neutral ‘Tangled’ and shift the lens of its marketing to the film’s swashbuckling male costar, Flynn Rider.”

Can you imagine if Disney decided to shut down a genre because it only appealed to little boys? Or if they switched a movie title so it wouldn’t risk highlighting a male star? It’s awful that this kind of radical gender discrimination exists for our smallest people– little kids who come into this world with huge imaginations and aspirations, big dreams that get squashed by a bunch of billionaire guys who run massive entertainment franchises.

Alas, Snow White, Sleeping Beauty, Ariel, Jasmine and the other Disney royals were all born in the 20th century. Now, different kinds of Disney characters are elbowing their way into the megaplexes and toy aisles, including Pixar’s “Toy Story” buddies Buzz Lightyear and Woody, Capt. Jack Sparrow from “Pirates of the Caribbean” and a platoon of superheroes from the recent acquisition of Marvel Entertainment.

Do you notice something about the characters listed above? Because neither the Los Angeles Times reporter or the Disney execs mention in the article that we are losing girls (Snow White, Ariel, and Jasmine) and getting boys (Buzz Lightyear, Woody, and Captain Jack Sparrow.) The Los Angeles Times goes on to report the current roster of upcoming movies includes, surprise, surprise, two more movies with males in the title roles: “Winnie the Pooh” (along with his friends: Eeyore, Piglet, and Christopher Robin?) and “Reboot Ralph.”

Remarkably, the men who run Disney/ Pixar, Ed Catmull and John Lasseter, go on in this article to congratulate themselves on their originality and creativity. I kid you not! This would be totally hilarious if these guys didn’t have such a hegemony on the kinds of movies– and accompanying toys and accompanying mass-marketing campaigns– our kids are exposed to. But because this boys club completely dominates kidworld, their privileging of males over females with no care at all, their disregard for half the population, is really sad.

Catmull said he and Lasseter have been encouraging filmmakers to break with safe and predictable formulas and push creative boundaries.

“If you say to somebody, ‘You should be doing fairy tales,’ it’s like saying, ‘Don’t be risky,'” Catmull said. “We’re saying, ‘Tell us what’s driving you.'”

Dude– could you be any more safe and predictable than putting out a line up of kids movies starring males? What’s driving you guys? Gender programming! And you don’t even see it! Or you are just pretending to be that cluless? Don’t you get that you are teaching and training girls starting at the youngest possible age that their roles will be only supporting? You are telling the girls of the world that they exist to make boys look good and to help them along on their cool quests and incredible adventures. How about some real creativity, Lasseter and Catmull? Can you try to imagine a magical world where girls’ stories are valued just as much as boys’ stories are? Where girls and boys are treated equally? Can you make a movie about that?

This post was originally published on Margot Magowan’s blog ReelGirl