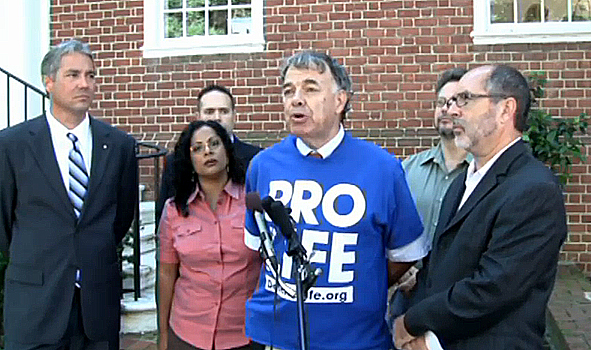 No matter where he goes, Dr. LeRoy Carhart is bound to meet resistance. For years, Dr. Carhart traveled each month from his clinic in Bellevue, Neb. to Wichita, Kan. to work with Dr. George Tiller. There he performed late abortions, a highly specialized practice providing vital health care to women whose health was threatened by pregnancies that had gone horribly wrong or whose fetuses were afflicted with anomalies incompatible with life.

Last week, Dr. Carhart announced plans to open a clinic in Maryland, driven to expand his practice after Nebraska enacted onerous abortion restrictions this year. The new clinic will be equipped to provide late-abortion procedures. Though his plans are nascent and he has not yet announced where the clinic will be located, area anti-abortion extremists are already gearing up to bully, intimidate and threaten the doctors and staff who will work there.

When asked to comment for an article by TBD reporter Amanda Hess, Defend Life founder and president Jack Ames, 68, essentially said that his group will be on Carhart’s clinics and doctors like white on rice. Ames says his group’s plan of attack would be to identify the doctors, take their pictures, leaflet their neighborhoods to let neighbors know they are “baby killers,” perform “sidewalk counseling” outside the clinic and show graphic photos of aborted fetuses.

In short, it sounds like Ames plans to carry out a campaign of harassment, intimidation and threats not unlike that endured by Dr. Tiller before he was murdered by anti-abortion extremist Scott Roeder.

Indeed, Ames has some disconcerting relationships with other anti-abortion extremists.

He spoke at a press conference in September alongside Operation Rescue president Troy Newman, who conducted a seven-year “No Place to Hide” campaign against Dr. Tiller that involved following him to his neighborhood and to his church, as well as targeting local businesses that provided any kind of service to Dr. Tiller’s clinic. The clinic’s staff were followed to their homes, and their neighborhoods were leafleted. Dr. Tiller’s picture was featured on Operation Rescue’s website, with references to “Tiller the Killer.”

Ames has boasted he is a friend of Randall Terry, founder of Operation Rescue, a man who has publicly prayed for doctors’ deaths. Ames was arrested along with Terry and other anti-abortion extremists for protesting at the University of Notre Dame during President Obama’s commencement speech.

The tactics used against doctors who perform abortions are reprehensible. Violence against clinics is also growing. Some 23.5 percent of clinics face severe violence, according to the Feminist Majority Foundation’s 2010 Clinic Violence Survey report, up from 20 percent in 2008. If extremists can’t legally ban abortion, they try to restrict access to it in any way they can, including intimidating and threatening anyone involved in the procedure: blocking clinic entrances, bombing clinics, arson, creating WANTED posters and stalking doctors, vandalizing and attacking clinics and doctors’ property, and of course, actually murdering doctors.

Ames claims that he is peaceful.  But given the history of similar tactics that have created a climate of violence and led to the murder of doctors and clinic workers, one can hardly be comforted by the subtle distinction. After all, Scott Roeder began his anti-abortion activities by joining Operation Rescue-sponsored demonstrations and so-called “sidewalk counseling” outside Dr. Tiller’s clinic, and went on to brutally murder the doctor.

Above: Jack Ames speaking at a press conference in September. Troy Newman stands to the far left. Photo screenshot of video.